STONECUTTERS ISLAND in Hong Kong used to be a favoured habitat for poisonous snakes and eye-catching birds such as the white-bellied sea eagle. Thanks to Hong Kong’s rapid development, it is no longer so hospitable. Its sky is full of gantry cranes, stacking 20-foot-long shipping containers in multicoloured tessellations, like giant Lego bricks. A cluster of decorative containers, daubed in graffiti, line the perimeter of container terminal eight, which is partly operated by COSCO, a state-owned Chinese shipping giant. In bright yellow lettering, one slogan instructs passers-by to “Respect Past, Embrace Future”.

Few Hong Kong companies have as much to tell about the past as Orient Overseas Container Line (OOCL), the world’s seventh-biggest container shipping line. Its founder, Tung Chao-yung, owned the first Chinese-crewed steamship to travel from Shanghai to France in 1947, and went on to build a shipping empire of over 150 vessels. His eldest son and successor, Tung Chee-hwa, survived the financial strains of the early 1980s (with the help of Chinese money) and became Hong Kong’s first leader after it was handed back to China in 1997.

The future, however, looks uninviting. The world’s shipping fleet, replenished by ever bigger vessels, has grown faster than the globalisation it serves. Reckless expansion by some firms, in an industry which overvalues market share, has hurt more prudent competitors. This has pushed OOCL into the arms of COSCO. On July 9th OOCL’S owners announced its sale to COSCO for $6.3bn, pushing their Chinese rival from fourth into third place among the world’s container-shipping lines.

If the merger is approved by antitrust regulators in America and Europe, it will be the latest of a string of big consolidations, including Maersk’s acquisition of Hamburg Süd, a proposed tie-up among Japan’s three biggest carriers, and COSCO’s earlier merger with China Shipping Container Lines. The industry may be the handmaiden of globalisation but it is congealing into regional oligopolies. When the dust settles in 2021, by when the current crop of deals will be concluded and ships under construction delivered, the top seven firms will control roughly three-quarters of all container ships, according to Drewry Maritime Financial Research, compared with 37% in 2005.

Consolidation should allow the two firms to remove any unprofitable overlap in their routes and operations. But COSCO’s cost-saving plans do not include cutting people or pay, at least for two years, it has promised. OOCL’s value to COSCO lies in its management talent as well as its tonnage: it is run more efficiently than many rivals. OOCL is also well attuned to global ways of doing things, as befits a company that carries more containers across the Pacific than within Asia. It now refuses to ship whales, sharks and dolphins, and has won plaudits for reducing emissions through the use of battery power in its redevelopment of the Port of Long Beach in Los Angeles. 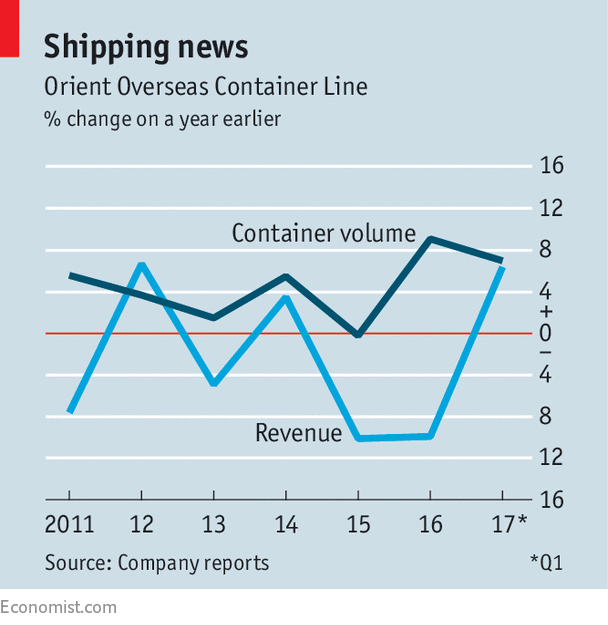 COSCO’s offer price of HK$78.67 ($10.07) per share certainly seems full of respect, valuing OOCL at 40% above its book value. The premium partly reflects a nascent revival in OOCL’s fortunes: revenues increased by 6.4% in the first quarter compared with a year earlier (see chart). The industry is recovering. Thanks to the demolition of many smaller ships, the global container fleet grew more slowly than traffic last year for the first time since 2011, says BIMCO, a shipping association.

But OOCL’s chairman, Tung Chee-chen (the founder’s second son), believes the recovery is vulnerable to a variety of dangers, including potential trade frictions and the remaining “supply overhang”. Shipping firms placed few orders for new vessels in 2016, but many older orders have yet to be delivered. More new capacity will be added this year than last, according to BIMCO. Those ships were requested in expectation of a rosy global economy that never arrived. The future would be easier to embrace if it were not so hard to grasp.