Just as many on Wall Street are warming up to bitcoin, one of the lone financial analysts who forecast a surge when the digital currency was just six cents now has an extremely negative view.

“A bearish trifecta — the Elliott wave pattern, optimistic psychology and even fundamentals in the form of blockchain bottlenecks — will lead to the collapse of today’s crypto-mania,” analyst Elliott Prechter wrote in the July 13 edition of The Elliott Wave Theorist newsletter.

“The price activity and manic sentiment that led to present prices have dwarfed even the Tulip mania of nearly 400 years ago,” he said. “The success of Bitcoin has spawned 800-plus clones (alt-coins) and counting, most of which are high-tech, pump-and-dump schemes.”

“Nevertheless, investors have eagerly bid them up,” Prechter added.

He’s the son of the famed technical analyst Robert Prechter, who popularized the Elliott Wave by using it to forecast the stock market crash of 1987 and has published a newsletter since 1979. However, debate over the accuracy of the Elliott Wave has grown after Robert Prechter called the end of the 1990s bull market five years before it actually ended.

The principle is a sophisticated form of technical analysis widely followed by traders that analyzes cycles of sentiment in an attempt to predict market performance — five waves typically signals a coming downturn.

The Elliott Wave for bitcoin 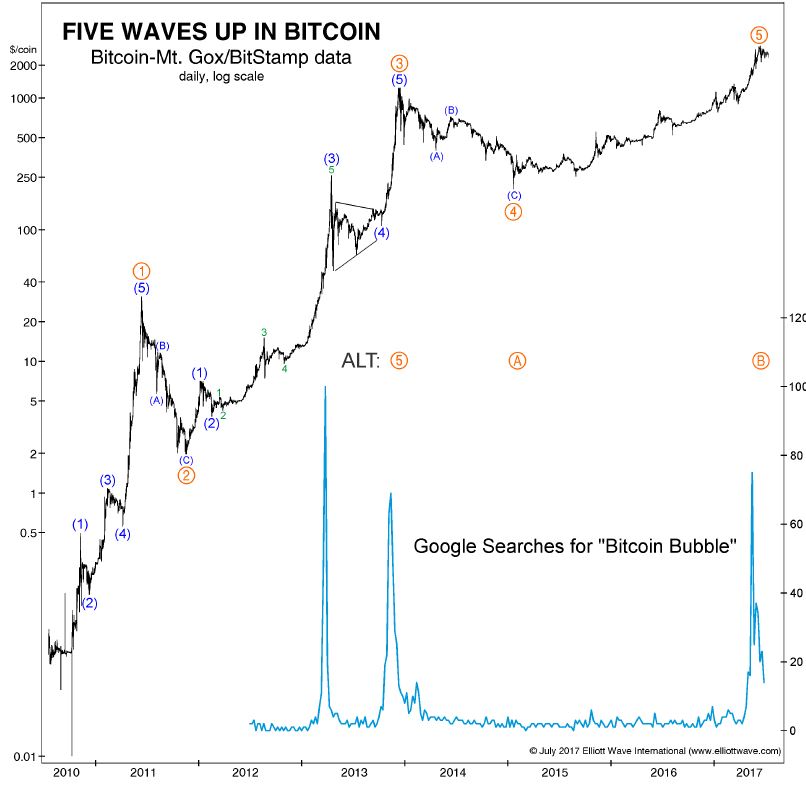 In September 2010, Elliott Prechter wrote in The Elliott Wave Theorist about bitcoin when it traded at 6 cents. Very few in the financial world seriously considered the digital currency at the time.

“It proved to be the buying opportunity not just of a lifetime, but so far of all time,” Prechter said.

As a result of the meteoric price surge, Wall Street has started paying closer attention to bitcoin in the last several weeks.

To Prechter, the forecasts for bitcoin to rise dramatically resemble calls in 1999, just before the burst of the dotcom bubble, for the Dow Jones industrial average to reach 100,000.

He said the excitement surpasses the tulip bulb mania in The Netherlands in the early 1600s.

As Investopedia tells it, tulip bulbs became such a prized commodity that by 1636 they were being traded on many Dutch stock exchanges and “many people traded or sold possessions to participate in the tulip market mania.”

“Like any bubble, it all came to an end in 1637, when prices dropped and panic selling began,” according to the article. “Bulbs were soon trading at a fraction of what they once had, leaving many people in financial ruin.”

“Technology has advanced greatly, but human psychology is still the same” 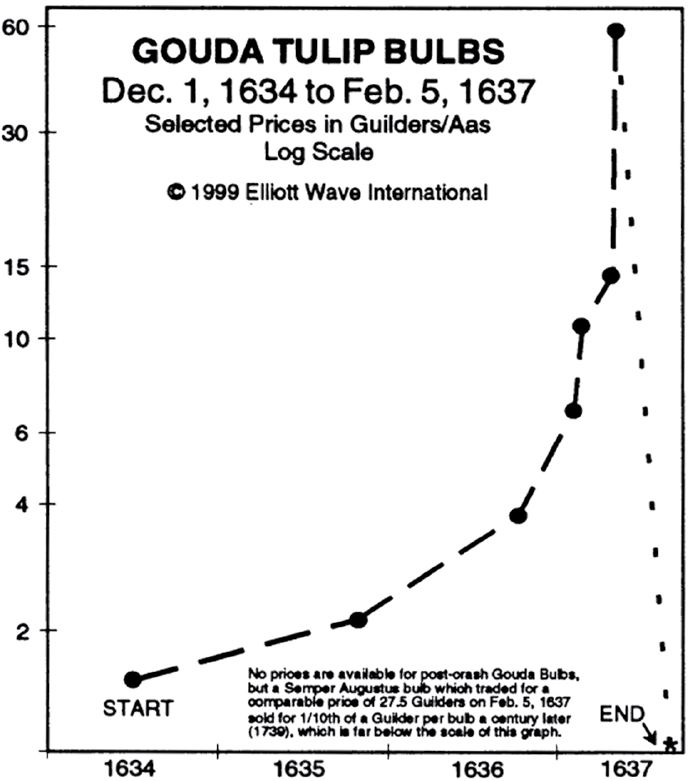 Some analysts have also compared the excitement around bitcoin and other digital currencies to the Beanie Babies craze in the 1990s.

Prechter also pointed to the challenges bitcoin and its rival ethereum are facing in order to expand their reach.

Bitcoin faces an Aug. 1 deadline for developers to agree on a system to upgrade the network and prevent the currency from splitting. Meanwhile, transaction fees ran up to $5 in June and are still near $2.

In June, some sales of new digital currencies clogged the ethereum network, creating a backlog of orders. Separately, ethereum prices briefly plunged from above $300 to 10 cents on one exchange before recovering.

To be sure, Prechter told CNBC that a mania “can be both a mania and a revolution at the same time.”

Like many digital currency enthusiasts, he sees significant potential in the cryptocurrencies for automating the banking and legal industries.

“The distant future of crypto is bright,” Prechter said in the report. “Crypto tech is like the internet in 1999: It was poised to take over the world, but the NASDAQ still fell almost 90% during the dot-com bust of 2000-2002.”

But bitcoin may not be part of that future.

“It’s too soon to know if Bitcoin is Facebook or MySpace,” Prechter said.