Demand for exorcists is soaring in France 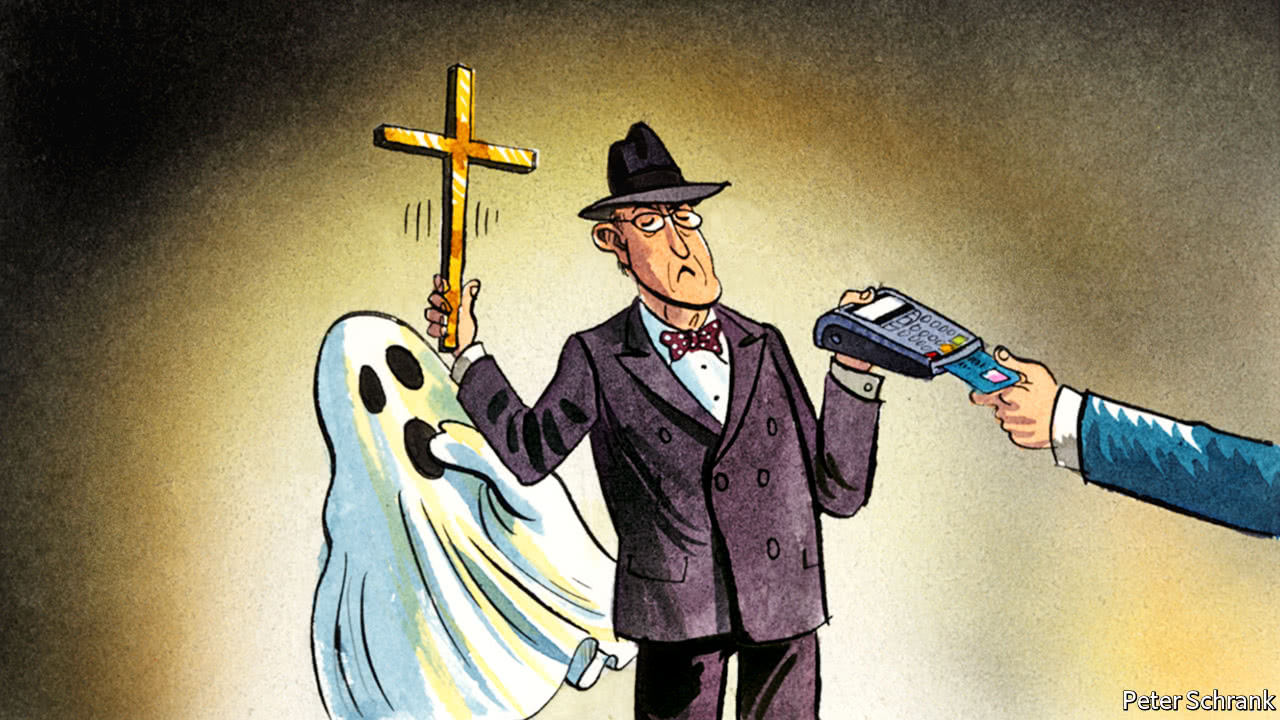 FOR A man poised for combat with evil spirits, Philippe Moscato looks remarkably at ease. In casual clothes and chatting about the tools of his trade—a “Vogel” crystal, compass, steel crucifix, pendulum and bag of salt from Jerusalem—he says he can deliver unreal results. Hired to exorcise an apartment in a wealthy district of central Paris, he predicts that the air will change. In the winter, he says, the owners will no longer need their central heating, the result of beneficial vibrations.

Mr Moscato’s work involves first waggling a pendulum, supposedly to assess the flat’s readiness, then lighting a candle, reciting from an exorcism manual, before blessing salty water that he splashes in every room. As he sprinkles, he delivers a flow of incantations. For an hour’s work he pockets €155 ($178). He has requests three or four times a week to de-spook property, and exorcises a person on average once a week. Paris, Lyon and the French Riviera are the areas most contaminated by bad spirits, he says. Demand for ghostbusting fluctuates. Following terrorist attacks in France and Belgium, late in 2015 and early in 2016, respectively, Mr Moscato said he had “an incredible avalanche” of requests.

Alessandra Nucci, a writer on Catholic affairs, says that there are more and more “independent operators” like Mr Moscato in Europe. The church has neglected exorcisms for a long time, she says, despite strong demand from the public for them. There are some 100 exorcist priests licensed by the church in France, according to the International Association of Exorcists in Rome, but most are inactive.

Another independent operator, Grégory Noel, makes a speciality of exorcising farms. For up to €500 a pop, Jean Clément provides a ceremony to release harmful “waves”. A third, Jean de Paracol, in southern France, markets a service to help small businesses that have been blighted by black magic. Gabriel Despréaux, near to Paris, says he has practised for decades but only started charging a fee two years ago. He now works as many as 15 hours a day dealing with clients. In a good month his business is generating €12,000 before tax.

What might explain rising demand? Television programmes that depict exorcism, notably imports from America such as Fox’s “The Exorcist”, may play a part. The relative ease of finding practitioners online is also a factor. Word-of-mouth recommendations from satisfied customers matter, too. The owner of the Paris apartment is reluctant to say if her experiment helped to improve the air. “The whole thing is freakish, but just by believing, it might make a difference,” she says. Then, as Mr Moscato leaves, a sunbeam suddenly lights up her apartment.

Source: economist
Demand for exorcists is soaring in France