Has Ryanair become too nice? 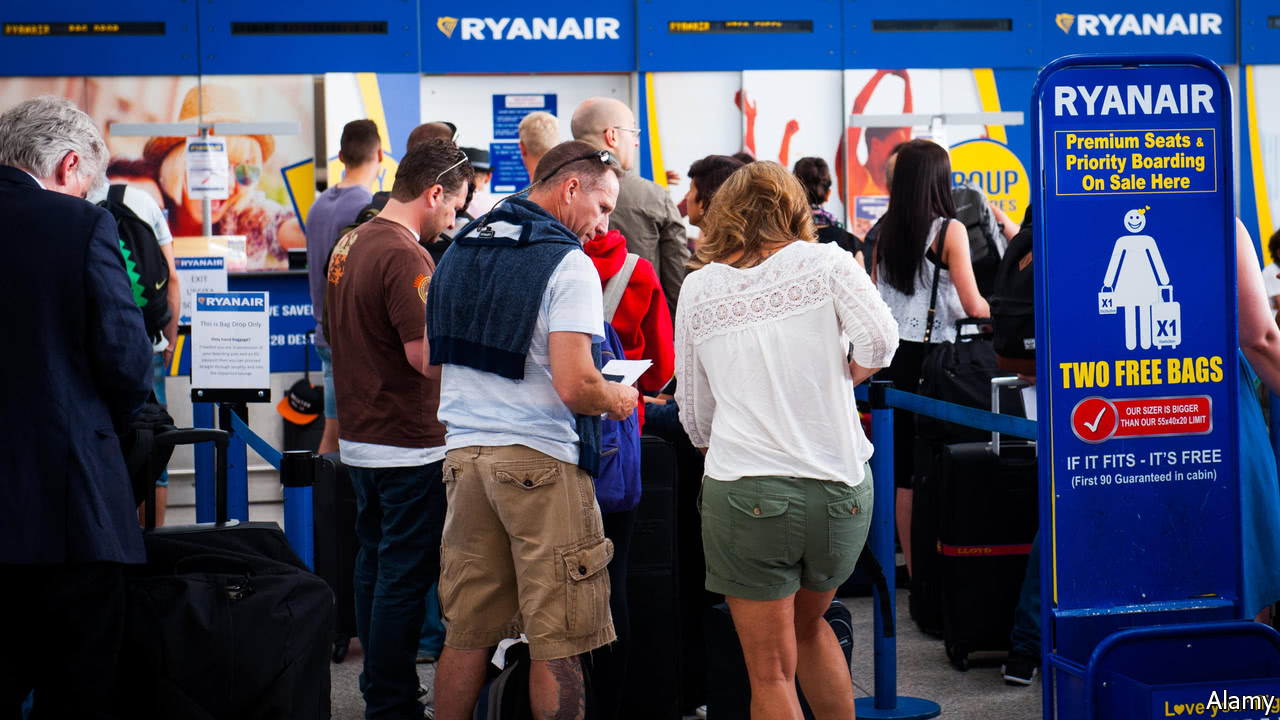 THREE years ago, Ryanair, Europe’s biggest budget airline, made the sudden decision to be nicer to its customers. Before that, brusqueness had been part of its strategy. Fares were low, but check-in staff were famously ruthless. One family was charged €600 ($701) to print their forgotten boarding passes (“idiots” according to Michael O’Leary, the airline’s boss, when they complained). Gatekeepers would obsessively check carry-on bags, demanding huge fees for those a smidgen over the limit. That culture started at the top. Mr O’Leary liked to berate his passengers, the second their expectations rose. “You’re not getting a refund so fuck off. We don’t want to hear your sob stories. What part of ‘no refund’ don’t you understand?”, he once told them.

It was a highly successful, perhaps even clever, strategy. The airline went from being an insignificant Irish operator to Europe’s second largest carrier after Lufthansa, regularly reporting juicy profits. Every time Mr O’Leary mooted the idea of installing coin-operated toilets on planes, or admitted that Ryanair crew were told to wake up sleeping passengers to sell them stuff, he was castigated. But the the words served to reinforce a single message to customers: we will stop at nothing to give you the lowest fares.

Ryanair’s epiphany—the moment it decided to stop “unnecessarily pissing off” its passengers, in Mr O’Leary’s words—came when it became interested in the business-traveller market. It is one thing to treat supply-led customers dismissively; the sort who will fly to Prague only because the fare is €10. It is quite another if you want to attract the sort of passenger who is travelling as part of his job, and is not picking up the bill.

Nearly everyone was a winner from that change of heart. By opening up a new market, the airline has made even more money: last year profits were €1.24bn, up 43% on the year before. And passengers are being treated humanely even as fares have remained low (in part because they are subsidised by those who are willing to pay a bit more for perks like flexible tickets).

In fact, the main losers have been journalists (including this one) who have been deprived of O’Learyisms to get indignant about. So it was with a certain nostalgia that Gulliver read of a recent rant by Neil Sorahan, Ryanair’s chief financial officer. Mr Sorahan was complaining about the “abuse” of the airline’s second-bag policy. Ryanair passengers are allowed to board with a 10kg carry-on and second “small” bag for free. But people are starting to take the Micky. Flyers have been turning up with oversize rucksacks, rather than check them into the hold for a fee (anything up £60, or $78, a pop). Toddlers have been deployed. “I’ve seen two-year-olds wheeling a bag up to the plane as people try to take advantage,” said Mr Sorahan, the executive, before adding that the airline’s baggage policy might have to be reviewed and, “We are victims of our own niceness.”

It is tempting to report this as a return to the bad old days; that Ryanair, try as it might, simply cannot resist taking a pop at its own customers. And the two-year-olds grumble is laughable. Ryanair charges the full adult fair for passengers once they turn two—they are fully entitled to use the allowance that brings.

But what of those who really do abuse the system? Of the many things that annoy your blogger about air travel, flyers who ignore cabin-baggage restrictions rates as among the most infuriating. Seeing passengers with full-sized suitcases trying to squeeze them into overhead lockers, crumpling Gulliver’s hat and forcing others into a forlorn hunt for space, drives him barmy. Nasty old Ryanair was right on that one: such allowances should be policed.

Of course, reducing the cost of putting luggage in the hold would help. According to the Guardian, less than one passenger in six now pays to check-in luggage with the carrier. That is affecting revenue, which is what is really behind Mr Sorahan’s grumble. Perhaps the airline could use carrot and stick to resolve it. Reduce fees for those wanting to travel with a large suitcase. And crack down on those who still try to smuggle whoppers onto the plane.