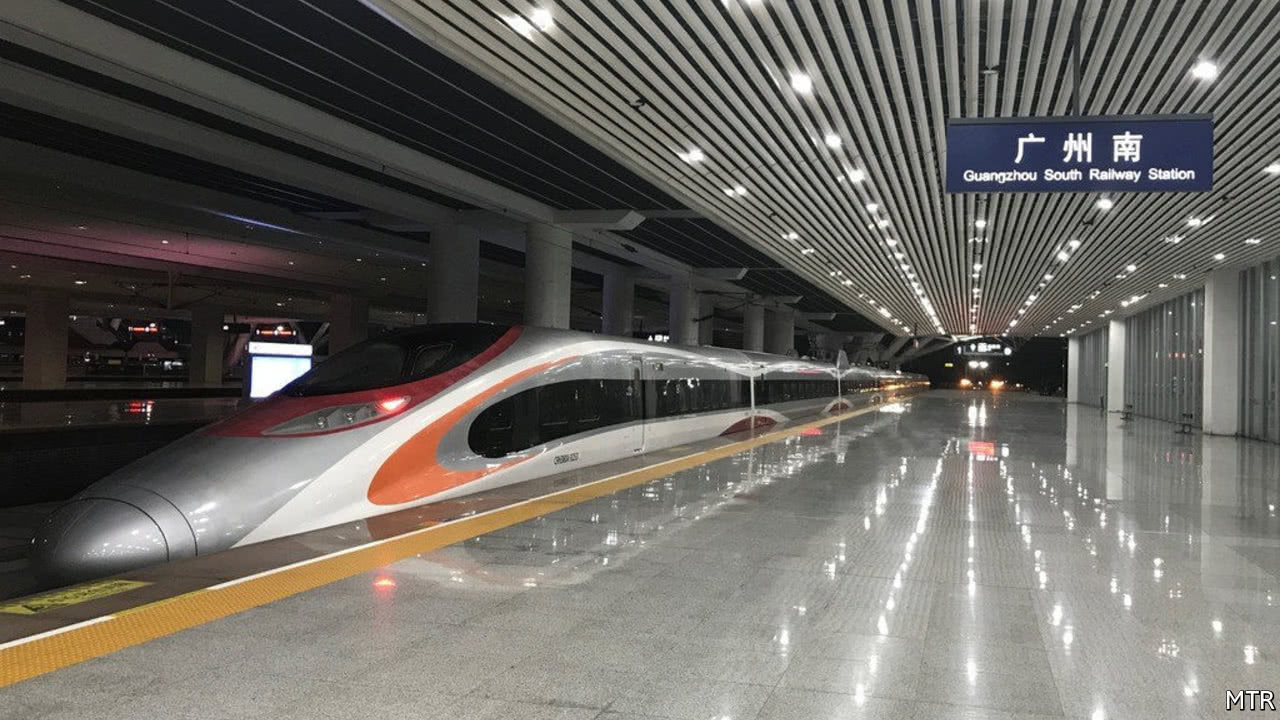 ON JULY 1st Hong Kong marked 20 years of mainland rule with a rare visit from Xi Jinping, the Chinese premier. Mr Xi arrived on an Air China flight from Beijing. The next visit by a Chinese president is unlikely to take place until 2022, when Hong Kong will be half way through its 50-year transition period between British and Chinese rule. Then, perhaps, he will travel by high-speed rail, and arrive at a smart terminal being built in West Kowloon.

Hong Kong is in the midst of an infrastructure-building boom. Work on a third runway at Chek Lap Kok airport began last year. Just outside, the finishing touches are being made to a 40-kilometre (25-mile) bridge-and-tunnel road linking Hong Kong, Macau and Zhuhai. And by next year a new rail line will connect Hong Kong to Guangdong and the rest of China’s high-speed network.

Trains on the “XRL” can travel up to 350km/h (although it is estimated that it will take 14 minutes to travel the 26km between Kowloon and Futian, making the actual speed more like 110km/h at first). The total journey time to Guangzhou South, where passengers can join the rest of the network, will be halved to around 48 minutes (without stops). Mr Xi’s trip from Beijing would take around nine hours.

The project was first mooted in 2000. By 2007 it was budgeted to cost HK$39bn ($5bn) and open in 2012; now it is expected to open late next year and cost HK$84.4bn. Before then, and despite running years behind schedule, a significant detail still needs to be agreed upon.

A constitutional arrangement known as “one country, two systems” promises Hong Kong a “high degree of autonomy” from the mainland until 2047. This includes proper borders, passport checks and visas. Those travelling on the ordinary-speed train, for example, must show passports at either end of their journey. But on July 25th the Hong Kong government announced plans to “co-locate” customs, immigration and quarantine control facilities in Hong Kong for both local and mainland immigration. That is similar to the system at the Eurostar terminal in London, which has both British and French immigration officials. Border control for both Hong Kong and the mainland would be dealt with within the station, with no checks done in the mainland. For passengers this would mean being able to board a train to Hong Kong in any Chinese city, regardless of whether it has clearance facilities.

The government insists that the benefits of high-speed travel, both in time and money, would be negated if passengers were slowed down by checks at both ends. (A former chief justice  said that the station should be “blown up” if it does not include joint checkpoints.) In the plan, 105,000 square metres of the station, and the trains themselves, would be leased to the mainland government, who would run them as a “free port” where mainland laws will apply to travellers once they have have passed through the two immigration checks. Whether it will also fall under the “great firewall”, which blocks Chinese access to websites such as Facebook (and The Economist) remains to be seen.

The government points out that Hong Kong has operated a similar facility in Shenzhen, on the mainland, since 2007. Carrie Lam, the territory’s chief executive, who is appointed by the mainland government and began her term on July 1st, says the plan is “in full compliance of ‘one country, two systems’”. But opposition politicians claim the proposal violates articles of the territory’s mini-constitution, known as the Basic Law, explicitly designed to keep Chinese law enforcement officials out. In a joint statement the justice, transport and security departments denied that, saying that since the port areas would be “legally regarded as outside the territorial boundary” of Hong Kong, the Basic Law would not apply and could not be contravened. Still, some democrats are not convinced. They worry that it could make it easier for Chinese security forces to spirit people across the border. Whether Hong Kongers are sacrificing autonomy for a little less inconvenience remains to be seen.

Source: economist
A high-speed rail connection between Hong Kong and the mainland is proving controversial