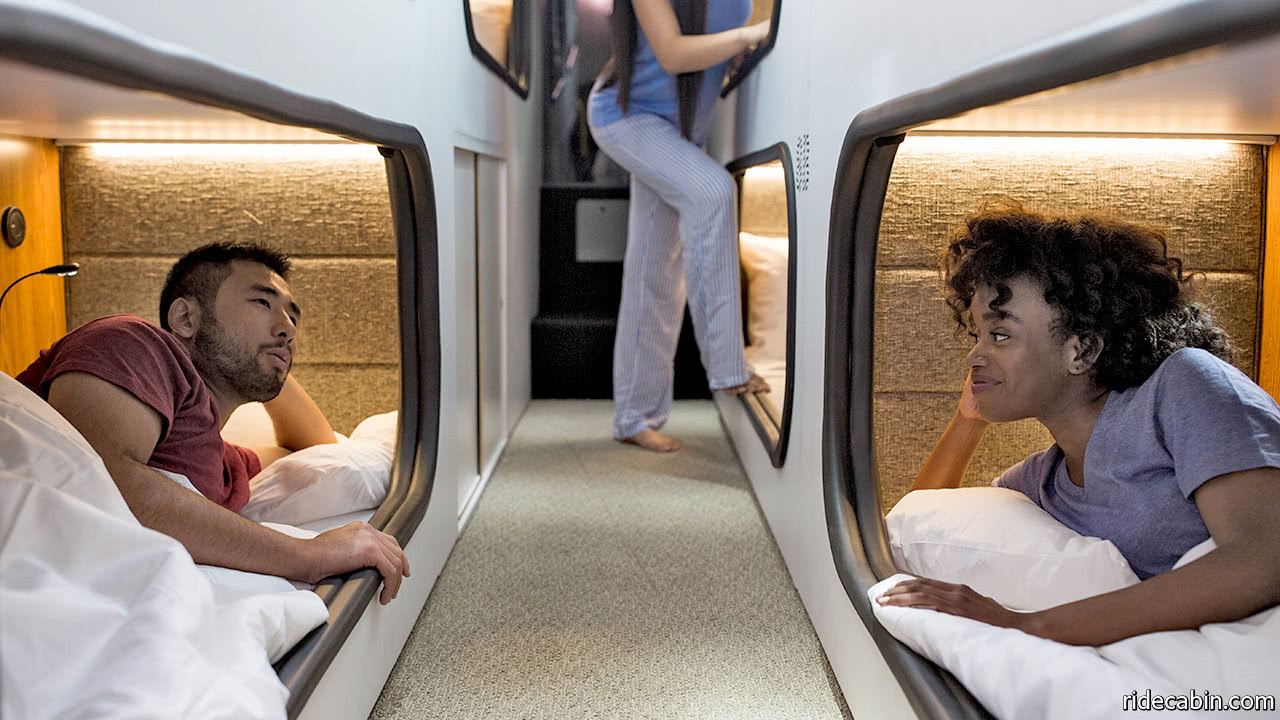 THERE is a new way to travel between Los Angeles and San Francisco. At $230 for a round trip, it may not be cheaper than flying, but at least it is slower.

Cabin is an interesting experiment; an attempt to compete with airlines by promising a better night’s sleep. Flying between the two cities may take less than an hour and a half. But getting to the airport, shuffling through the security queue, waiting at the gate, picking up your bag upon arrival, and getting from the airport to your actual destination can nearly quadruple the total travel time. That means a trip can eat up most of the day. Or if you want to travel at night, you have about an hour to sleep, between several hours of hassle and tedium.

Rather than go through that rigmarole, Cabin is betting that some passengers will instead choose an overnight bus, on which they crawl into sleeping pods, stacked like bunk beds but ensconced behind curtains and soundproof walls, and wake up eight hours later at their destination. On offer: water, coffee, melatonin and a communal area for people who are not sleepy. Not on offer: room to sit up within the sleeping pod. There is one objective on a Cabin (called SleepBus in an earlier iteration), and that is to reach the destination via the land of nod. The drivers intentionally go slowly and take back roads so that the trip, normally six hours, lasts eight.

The service currently runs only between Los Angeles and San Francisco, leaving each city at 11pm and arriving at 7am. Although Cabin is looking to expand to other cities, the current route is a perfect example of that awkward travel distance to which there is no good solution. Others abound, such as Washington-Boston or London-Edinburgh: a short flight that sounds easy, until you realise it is part of a four- or five-hour total travel itinerary.

There are, of course, other options. You can drive, but being behind the wheel tends to limit the chance of getting some shut-eye. You can take a train, but Amtrak routes between Los Angeles and San Francisco can be several times as expensive as Cabin or flying, plus you don’t have a bed and are likely to be woken up periodically by stops, announcements or fellow passengers bumping your elbows.

The arrival of self-driving cars could provide a nice alternative for these types of trips. They do not come with beds or fully reclining seats—at least not yet—but passengers will probably be able to programme a route that allows for a full night’s sleep, and unlike Cabin, they can travel between any two cities or addresses, not just along a prescribed route. Cabin itself, meanwhile, is hoping that its buses will one day be autonomous.

There is another option on the table that could, at least hypothetically, obviate the need to worry about balancing sleep and travel. Various companies have pitched a “hyperloop” concept that could ostensibly transport carriages between Los Angeles and San Francisco in as little as half an hour along near frictionless tubes. (Last month, Elon Musk of Tesla and SpaceX claimed on Twitter that he had received “verbal govt approval” to construct an underground hyperloop that would connect New York and Washington, DC in 29 minutes, although the lack of details provoked scepticism.) At those kinds of speeds, there is no need to budget time: you could leave Los Angeles after work and be in San Francisco for dinner, with a full eight hours of shut-eye ahead of you.

But that project is a long way and a few potentially insurmountable hurdles from reality. In the meantime, for those of us not on the Cabin route, the same distasteful choice persists, between a plane, train and automobile that might offer the shortest travel time or the lowest cost but definitely no California dreaming.

Source: economist
Why an eight-hour bus ride from Los Angeles to San Francisco might beat a flight