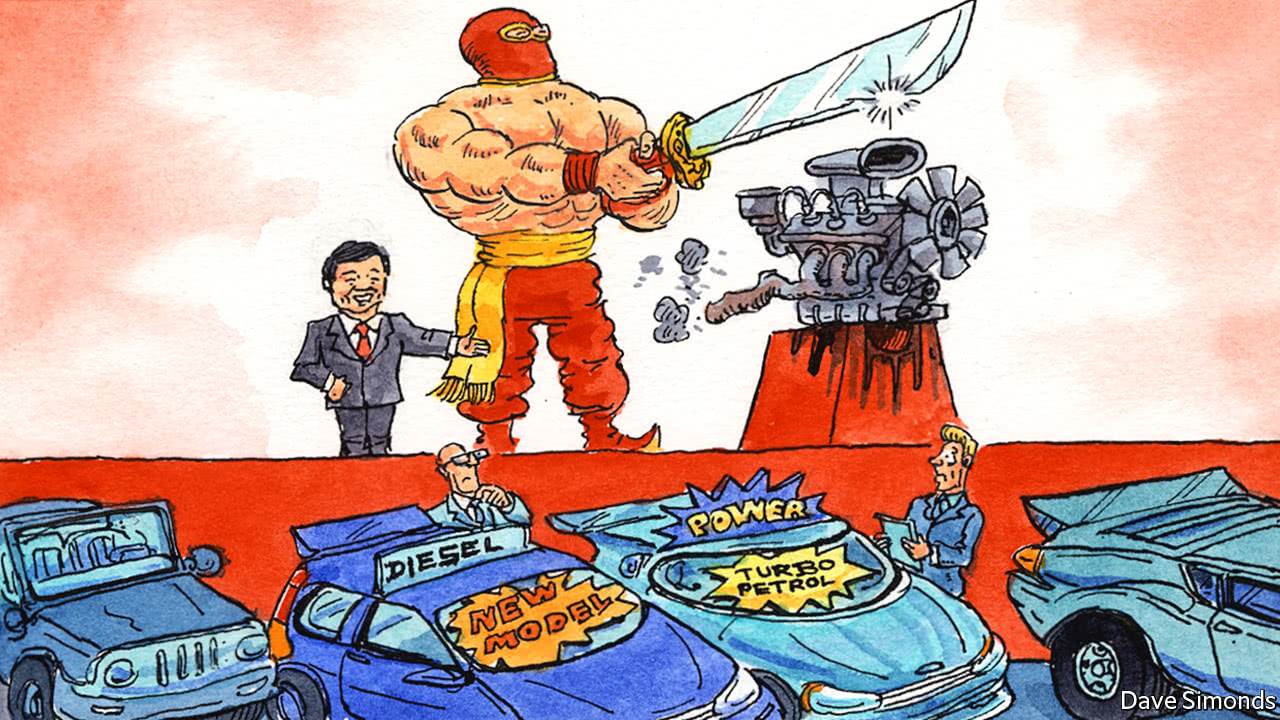 “A DEFINING moment for the auto industry.” That is how usually restrained analysts at Sanford C. Bernstein, a research firm, described the news that China’s government wants to move towards a ban on gas guzzlers. On September 9th, Xin Guobin, vice minister of industry and information technology, told an automotive conference in Tianjin, a grimy industrial city near Beijing, that the government is developing a long-term plan to phase out vehicles powered by fossil fuels.

The news reverberated around car firms, for which China is the largest market. William Russo of China’s Gao Feng Advisory, a consultancy, who was previously a senior executive at Chrysler, says China is simply far too big to lose out on. “If China says no more fossil-fuel powered cars, global carmakers must follow.”

No timeline for a ban was suggested. China already has ambitious medium-term goals for automotive efficiency and climate change, including a cap on carbon emissions by 2030. Experts reckon this new ban might come into force around then. It is unclear whether the ban will include only pure-petrol cars or also plug-in hybrids that combine petrol engines with electric motors.

Mr Xin’s news came just before the opening of the Frankfurt Motor Show, a spiritual home of conventional cars. Many attendees were sceptical. Despite much talk about national bans—this year Britain and France have said that by 2040 new cars completely reliant on petrol or diesel will be illegal—no country has passed concrete legislation to implement a ban, some noted. Others saw opportunity. Thierry Bolloré, chief competitive officer at Renault, the French arm of Renault-Nissan, a Franco-Japanese giant, says his firm is well prepared to start making electric vehicles (EVs) in China.

Western firms are not going to get things their own way, however. China’s government is getting better at boosting its own EV manufacturers after years of giving out ill-considered subsidies and setting unrealistic sales targets. Local manufacturers have not been able to match the quality and innovation of petrol-fuelled cars produced by Western rivals. But China has advantages when it comes to electrification and connected cars. It has many inventive internet companies, is home to some of the world’s biggest battery producers and is at the centre of electronics manufacturing.

BYD, a Chinese automotive firm in which Warren Buffett has a stake, has dramatically improved the quality of its EVs and car batteries, and is making a push abroad. A new generation of inventive, venture-backed EV firms like ThunderPower and Nio are making a splash at global auto shows. The electrification of transport could give Chinese carmakers and suppliers a chance to change from also-rans into champions.