Toys “R” Us files for bankruptcy 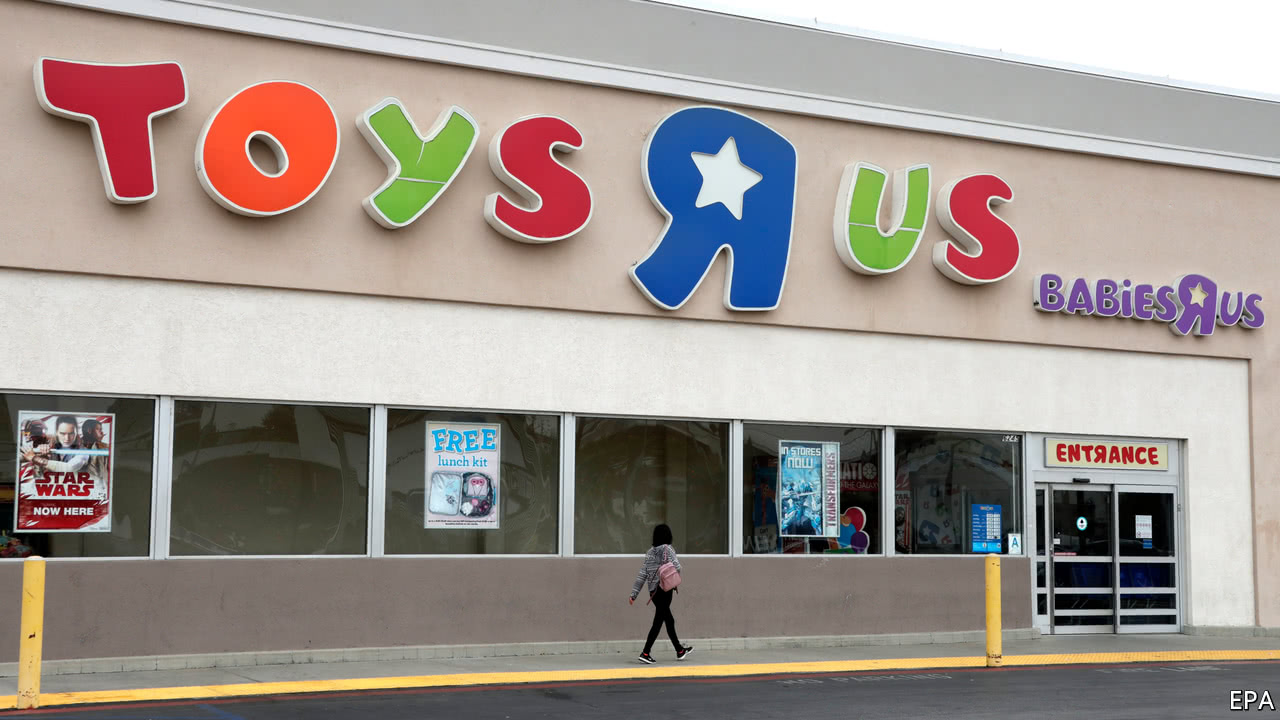 ASK young American parents about Toys “R” Us and they are likely to be able to sing a jingle from their childhood: “I don’t wanna grow up, ’cause maybe if I did, I couldn’t be a Toys ‘R’ Us kid”. For children of the 1980s, Toys “R” Us was a mecca at the strip mall, an awe-inspiring array of dolls, trucks, board games, bikes, art supplies and much more. Many of them noticed when on September 18th, the chain filed for bankruptcy.

Dave Brandon, the company’s chief executive, emphasised that shops would carry on operating as usual and claimed that the best era of Toys “R” Us was still to come. “These are the right steps to ensure that the iconic Toys “R” Us and Babies “R” Us brands live on for many generations,” he declared. A Chapter 11 bankruptcy, many analysts agree, is a sensible way to deal with the chain’s $5bn of long-term debt. So Toys “R” Us is not dead. But its future is hardly certain.

The company’s tale in many ways typifies the ailments of American bricks-and-mortar retailing. Its woes began in the 1990s, as big-box stores grew both in number and in size. Walmart’s vast selection meant parents could buy a toy in the same place where they picked up milk.

Then came e-commerce. Toys are particularly suitable for online shopping. Unlike a dress, they do not need to be tried on for size, and unlike a peach they do not need to be felt for ripeness. Those of prime toy-buying age, parents with young children, are busy. Women aged 25-44 spend almost as much time shopping as they do eating and drinking. Given the choice of buying a train set online or in a store, particularly when a toy shop can transform even the calmest child into an insatiable lunatic, many parents opt to buy online. Amazon makes that extraordinarily convenient. The result is that many former Toys “R” Us kids have no interest in being Toys “R” Us parents. Cowen, a financial-services firm, expects 41% of toys and games in America to be purchased online this year, about twice the proportion sourced from the internet in 2009.

Toys “R” Us also suffers from other common ills. The first is a heavy burden of debt. Three private-equity firms bought Toys “R” Us in 2005 in a leveraged buyout, adding substantially to its borrowings; it pays around $400m a year in interest costs, even as it tries to compete with Amazon. It also has $400m in secured and unsecured debt maturing next year. Many expected a bankruptcy, but the filing, just ahead of the vital holiday selling season, underlines how squeezed the firm has become. Two other retailers—Payless ShoeSource, a 61-year-old discount shoe-seller from Kansas, and Gymboree, which began selling children’s clothing in 1986—are among those that declared bankruptcy this year after being backed by private-equity firms that left them similarly weighed down.

Second, Toys “R” Us has not helped itself. Like many department-store chains, its inventory has been painfully slow to adapt to changing trends. Sales of fidget spinners, a toy that has become ubiquitous in the past year, got twirling online first. Nor is it clear whether its strategy of trying to lure families to its shops with live events, such as, for instance, music classes for children, will work.

Like so many other retailers, Toys “R” Us is striving to build its business online. That has been bumpy work. In 2000, back when Amazon was still trying to move beyond selling books, Toys “R” Us joined with the e-commerce giant to manage online toy sales. Four years later it sued Amazon, arguing that the e-tailer had broken the terms of their agreement. In 2006 a judge agreed, but 11 years on that victory gives scant solace. 