Ryanair cancels more than 2,000 flights over the next six weeks 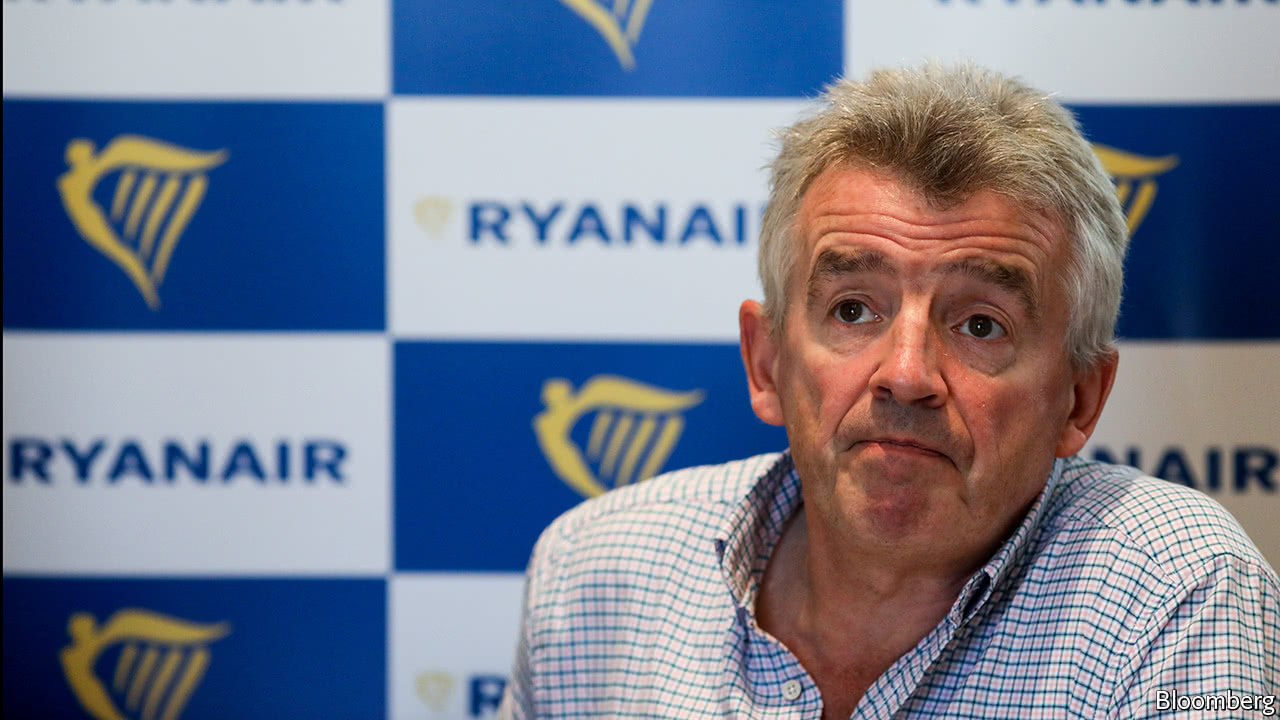 RYANAIR, an Irish airline, is known for three things: low fares, the brash way in which Michael O’Leary, its chief executive, advertises them, and its record for sticking to its flight schedules. The last of these is key to its appeal: many businessmen chose Ryanair more for its punctuality than its cheapness. And so the announcement on September 15th that it is cancelling over 2,000 flights between now and the end of October—around 2% of its capacity over the period—is more serious than it may at first seem. Ryanair’s share price fell by more than 5% in the aftermath.

The problems began in early September when Ryanair’s on-time record plunged, owing to a pilot shortage. To restore punctuality, it cancelled many flights at short notice; passengers were marooned around Europe. Up to 400,000 people booked on the 2,000 scrapped flights risk missing business trips and holidays.

Mr O’Leary says the problems were caused by a change in the way the airline calculates pilots’ leave. The holiday year used to run from April to March, but under pressure from the Irish Aviation Authority Ryanair is adopting the calendar year, as new EU rules require. Ryanair obliged its pilots to take their annual leave between April and December this year. So many are taking their holiday after the summer rush that not enough are available to maintain a full schedule.

Other airlines say Ryanair’s woes are also due to pilots leaving for better pay and conditions. Norwegian, a rival low-cost carrier with outsized ambitions, claims to have recruited over 140 Ryanair pilots this year (out of around 4,200 at the Irish carrier). Mr O’Leary denies that the airline has a shortage. But evidence abounds that Ryanair’s crewing problems will substantially lift costs per passenger kilometre. Compensation and lost fares for the cancelled flights will cost €25m ($30m). Ryanair will also need to spend an extra €30m on hiring pilots.

The combined cost is a small fraction of Ryanair’s profits of €1.3bn in the year to March. More serious was a less-noticed European Court of Justice ruling on September 14th which decreed that low-cost airlines’ employment disputes with crew must go to local labour courts in all the countries where airlines have bases (Irish labour law is broadly more flexible). Analysts say the firm’s costs may rise by around 5% as a result.

Lately Mr O’Leary has been warning of the possible consequences of a British exit from the European Common Aviation Area with no new aviation deal. EU carriers may serve any airport within the bloc, but after Brexit flights between Britain and the remainder of the EU might have to cease. Headlines about stranded passengers could damage British politicians, he claims. This week he used Ryanair’s debacle to return to the theme. “Imagine the problems this week times one thousand,” he said. “That is what a no-deal Brexit will look like.”

Source: economist
Ryanair cancels more than 2,000 flights over the next six weeks