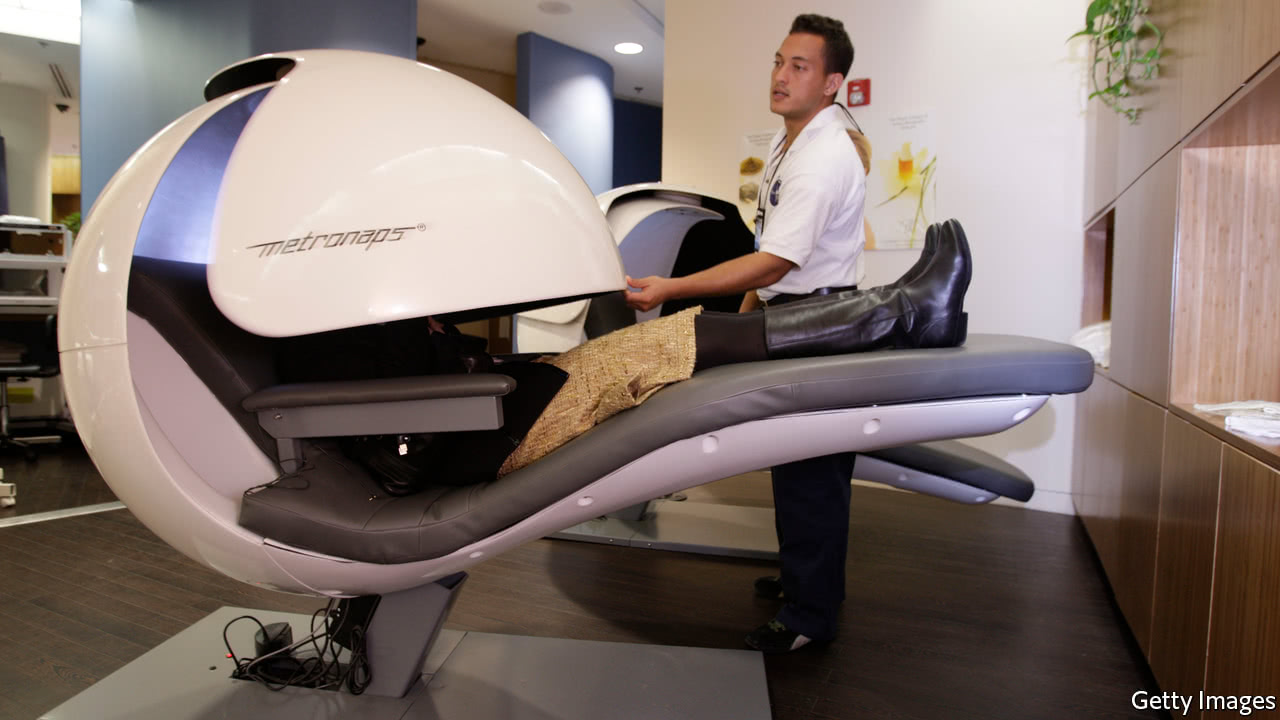 IN THEORY, overnight air travel should be wonderfully convenient. Instead of booking a hotel for the night and losing a day, travellers simply sleep while they fly. In reality, sleeping on a plane is hard, and at an airport tougher still. The chairs in terminals, nobody’s idea of comfort to begin with, tend to have armrests that make splaying out unfeasible. Even in business-class lounges, travellers contort themselves into impossible shapes to pretend that workspace desks are actually beds.

But soon there may be less need for such acrobatics. Sleep pods are coming to more and more airports. Last month, Washington Dulles International put out a call for proposals for a company to provide “a quiet and comfortable place within the airport to sleep, relax, or work while waiting to board a flight”. Mexico City’s airport has just added sleep pods with a space-age design for $30 a night. YotelAir, which offers pods in Amsterdam, London and Paris, is a touch more expensive at $42 for four hours. Dearer still is Minute Suites, which has operations in three American airports with a fourth coming later this year. Its prices start at $32 an hour. NapCity, which is yet to sign its first lease, will charge $45 for the first hour and a slightly lower rate after that.

The concept is not new. Japan opened its first capsule hotels in the late 1970s. But today sleep pods seem to be on the verge of conquering Western airports. And they have taken on a distinctly Western style, leaving behind the Asian model—often little more than a mattress and the minimum requisite space for a human body. Some have televisions and charging stations and sell items such as toothbrushes.

That is great news for flyers. But the bigger question for the future of sleep pods is whether they make sense for airports.

One concern may be revenue. Airports generally take a cut of the money that retailers in the terminal make. That is by no means pocket change. The founder of one capsule hotel company told Bloomberg that a single seat in a restaurant can generate $20,000 a year. It is unclear whether sleeping pods, even the most-compact of which take up the space of a couple of restaurant seats, will generate returns that big. And so airports may think twice before giving up room to them.

Airports also may be wary of creating new competition for nearby hotels. They enjoy a good relationship with these hotels, which offer lodging for airline crews and stranded passengers, and send shuttles to and from the airports. Hoteliers would surely balk if airports cosied up to their cheaper and more-convenient rivals.

But travellers are willing to do a lot for a good night’s sleep. Take, for example, the new bus service that runs from Los Angeles to San Francisco, which Gulliver recently reported on. It goes out of its way to take longer so that passengers can get eight hours of rest. Whether airports will be equally willing to let its customers get some shut-eye remains to be seen.

NextRyanair’s mass cancellations are a problem of its own making