Why scan-reading artificial intelligence is bad news for radiologists 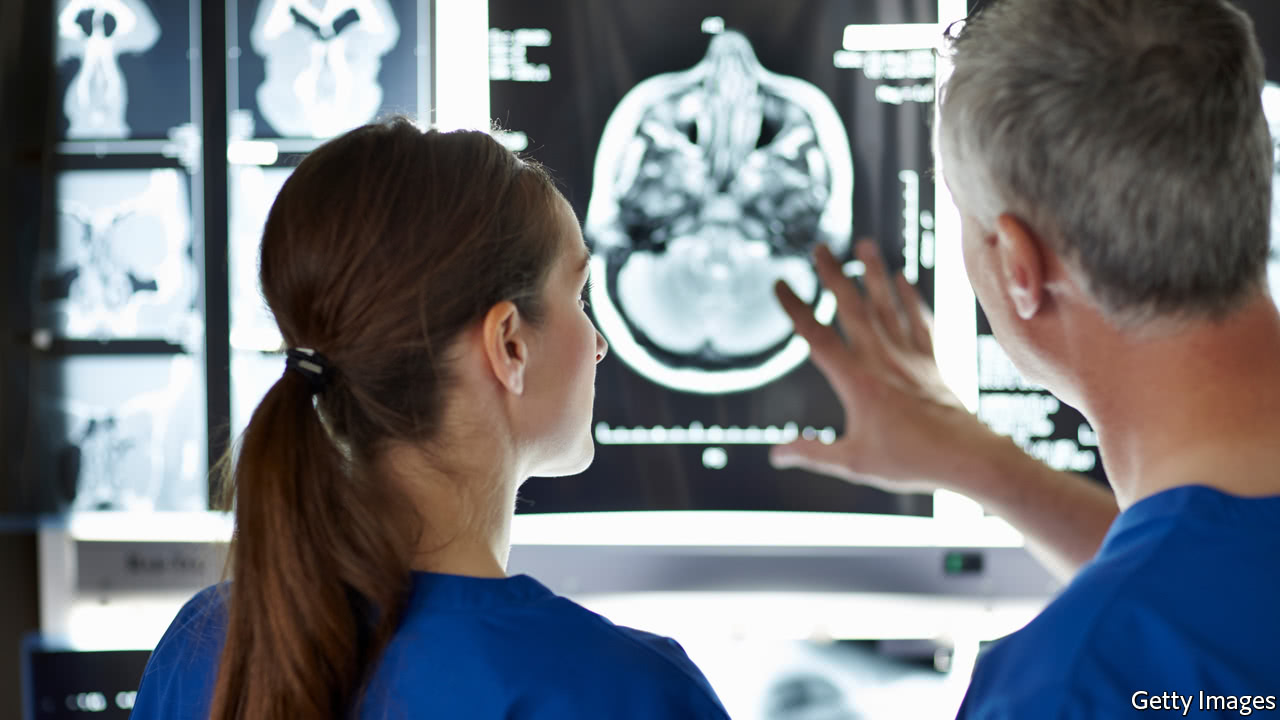 THE better artificial intelligence gets, the greater the popular concern that smart machines will soon usher in a labour-market catastrophe. In Chandler, Arizona, Americans can at this moment hail a ride from a car without a human at the wheel. Web users can read high-quality, instant translations of foreign-language newspapers—no professional translation service needed. And developers of machine-learning technologies are moving rapidly to apply their tools across a vast array of medical tasks.

Despite this, economists, with rare exceptions, are relatively sanguine about the possible labour-market effects of AI. Technological change always raises fears of mass unemployment, after all, and yet there are more people working worldwide than ever. Count me among those who reckon this approach is a bit too dismissive of the threat. On the one hand, while the very broad story of technological progress over the past two centuries has been one in which employment has grown massively, across shorter periods (which can themselves last for decades) technological disruptions can produce quite a lot of hardship for particular subsets of workers—and even, in some cases, for the labour force as a whole. And on the other, AI is a different animal than the steam engine or the desktop computer.

An interesting recent piece by Greg Ip, a friend and former colleague now at the Wall Street Journal, helps illustrate why life might be harder for workers than optimists appreciate. Mr Ip considers the deployment of an AI trained to recognise pneumonia on chest X-rays. America’s medical industry produces about 60bn radiological images each year, Mr Ip notes. It is easy to imagine how an AI that can effectively read such scans could have a significant impact on the employability of working radiologists. But Mr Ip says not to worry:

In recent decades, the volume of medical images has skyrocketed, reflecting growing patient loads, more types of scans and the number of images each exam produces. CT scans that once captured one dimension of the body can now capture all three, generating hundreds or even thousands of highly detailed images…

The strain of all that data, he says, is why some images in Britain go weeks without being read, why many radiologists are burned out, and why radiologist shortages loom, despite high pay.

In “many of the everyday AI applications, the machine predicts the most relevant options and sorts them, but the human makes the actual choice,” says Avi Goldfarb, an economist specializing in AI at the University of Toronto…

Maximum accuracy requires the algorithm be trained separately for every condition and disease, a costly and labor-intensive process. Then, notes Dr. Dreyer, the Food and Drug Administration must approve the system and doctors then integrate it into their practices.

So, he concludes, AI will probably make radiological work easier and more interesting rather than redundant. Indeed, he notes, the AI scare might well resemble the panic in the 1990s over the employment effects of the outsourcing of tasks to cheaper technicians abroad, which never seriously affected rich-world practitioners.

I would advise radiologists to take the threat far more seriously, for several reasons. First, as Mr Ip notes, radiologists are currently in short supply, despite high pay. The new AI promises to make existing radiologists significantly more productive, which is good: it is the absence of rapid productivity growth in health care which contributes to the rising share of health-care spending in GDP. But it is also the absence of rapid productivity growth in health care which accounts for the extraordinary growth in employment in the sector. (Health care jobs account for a third of total employment growth in America since 2017.) Rising productivity in scan-reading might not lead to stagnant or falling employment of radiologists if it meant a fall in the cost of scans which led to a massive increase in the number of scans administered, but there is no indication in the piece that this is a likely outcome.

Employment magnitudes matter, and technological shifts which replace large numbers of low-productivity radiologists with a smaller number of high-productivity radiologists mean, at a minimum, a serious disruption awaits many radiological workers. What’s more, as radiologists cease to be in short supply, their bargaining power will be eroded, and so, too, will their ability to ask for and receive pay rises. If lots of working radiologists find themselves in competition for a smaller number of jobs, it is possible that even those who continue to work in the field find themselves unable to capture much in the way of pecuniary benefits as a result of the productivity boost from AI.

Over the long run, other factors loom larger for the fate of radiologists. AI capabilities are anything but static. Existing AIs may work best as complements for human workers, but that will almost certainly change in a very short amount of time. The techniques underlying machine learning are themselves getting better at an astonishing pace, for one thing. For another, the value humans add, in assessing the information given to them by AIs and making judgments, can itself be used to train AIs to do their jobs better. The radiologists that continue to work will in effect be training their replacements. And should rising productivity in radiology lead to an increase in the number of scans, that too will add to the data available to the machines, further boosting their capabilities. It seems a good bet that a capable, experienced radiologist will not be replaced by a machine within the next five to ten years. But what sort of career prospects are students now considering whether to train to become a radiologist likely to face on entering the labour market?

Of course it is possible for displaced workers to find other employment. But the bigger the adjustment, the more difficult it will be for individual workers, and the more we should expect a decline in pay to play a critical role in clearing the labour market. And the other thing about AI, of course, is that technological improvements achieved in one part of the economy are quite likely to come alongside, and indeed to contribute to, technological improvements elsewhere in the economy. That is fantastic news for consumers—provided that we can manage the transition without suffering a major social crisis (or strangling the technology in its infancy to avoid one). But it also means that workers have plenty to fear.