MUSIC lovers do not typically go to the opera to buy a speaker. But at the Palais Garnier in Paris they now can: Devialet, a local maker of high-end speakers, on November 29th opened a store in the 19th-century music venue to sell its most sophisticated product, called Phantom. Looking like a dinosaur egg, this supercomputer for sound (priced at $3,000) is considered one of the best wireless speakers available. It also comes with a dedicated streaming service for live performances, including some at the Palais Garnier.

This Phantom at the opera is the latest example of how digital technology is transforming speakers, headsets and other audio devices. Once mostly tethered to hi-fi systems, they are now wireless, increasingly intelligent and capable of supporting other services. As a result, the industry’s economics are changing.

Only a few years ago the audio industry was highly fragmented, says Simon Bryant of Futuresource, a market-research firm. Hundreds of brands offered their wares, both premium and basic, often with identical components. As with other device businesses, the industry was a “vertical” one: if speakers used any software at all, it was specific to the product.

All this started to change with the advent of smartphones, which made music more portable by connecting music-streaming services such as Spotify with wireless speakers. Smartphones have also given a boost to headphones, which are becoming ever more versatile, with features now ranging from cancelling out ambient noise to real-time translation.

These new possibilities have proved hugely popular: the global market for audio devices has rocketed in recent years (see chart). According to Futuresource, only about 200,000 wireless speakers were sold in 2009; this year the number is expected to be 70m. Headphones have been on a similar tear. 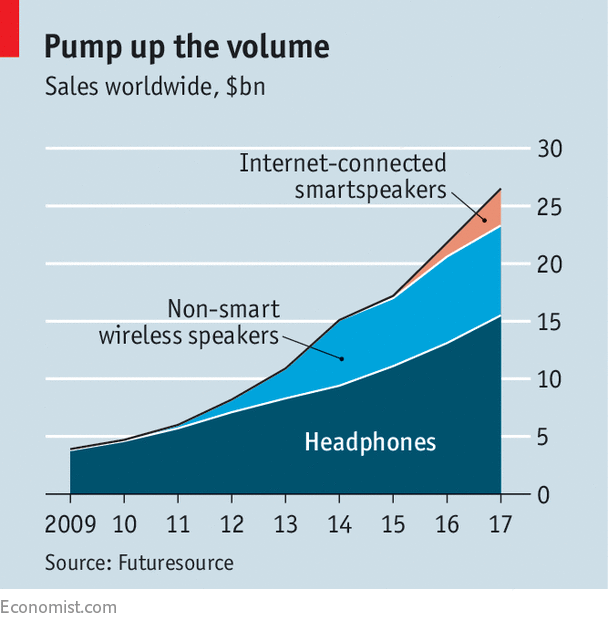 Smartspeakers, which were pioneered in 2015 by Amazon with the Echo, will be even more disruptive. Nearly 24m of these devices, essentially voice-controlled remote controls for everything from music to lights, will be sold worldwide in 2017, estimates Strategy Analytics, another market researcher—a number it expects to quadruple by 2022. Once households have one, they buy more to spread them throughout their homes (apparently nearly a tenth now live in bathrooms).

Smartspeakers are pushing the audio-device industry to become “horizontal”. The voice that emanates from Amazon’s Echo or Google’s Home is not just a digital assistant, but a “platform” for all kinds of services, of which most are developed by other firms. Alexa, as Amazon’s version is called, already boasts more than 25,000 “skills”, as the firm calls such services. These range from ordering goods and finding a mobile phone to turning up the heating and (early next year) asking The Economist for the latest on any given topic. Similarly, wireless earbuds, such as Apple’s AirPods and The Dash by Bragi, a startup, may become so clever that more and more people will leave them in all day, for instance to monitor their health or for constant access to a digital assistant.

Conventional speaker firms are trying to catch up. In September at IFA, a trade show in Berlin, booths of various makers were adorned with logos of Amazon or Google, signalling that they already have or will integrate a digital assistant in their products. But if the history of the smartphone is any guide, such platforms will turn the hardware into a commodity, with most of the profits going to the providers of software and services. Having sold 75% of all smartspeakers (at low prices that are thought to be close to the cost of making them), Amazon is now the world’s biggest speaker brand. Incumbents will also have to contend with Apple, despite the delay of its smartspeaker until early next year.

The dominance of a few platforms is not a forgone conclusion, says Mr Bryant of Futuresource. More specialised ones are likely to thrive, too—like Microsoft’s Cortana, which is good at understanding business jargon. But some audio firms feel the need to branch out. Sonos, which pioneered wireless speakers a decade ago, now wants to become an über-platform, integrating all voice assistants and streaming services, so consumers who like Sonos speakers have a choice. Harman, which in March was bought by Samsung Electronics, has similar plans for entertainment systems in cars.

And then there are companies which do not build their own speakers, but offer technology to enhance other products. Dolby and DTS, for instance, are busy creating software for what is called “immersive audio”. Combining several speakers, Dolby’s Atmos technology—first introduced in cinemas, but now available for home use—already “places” sounds in space. The next step is separate personal sound zones for each listener in a room, in effect creating invisible speakers.

So why does Devialet, which last year got €100m ($106m) in fresh capital, think it can succeed by selling expensive high-end speakers? The answer is that it wants to be a platform, too. The speakers are mostly meant to demonstrate its technology, in the hope that other companies will integrate it into their products. The first example, launched last month, is a soundbar (a slim loudspeaker) it has developed together with Sky, a broadcaster. “If you see yourself just as an audio company,” says Quentin Sannié, Devialet’s chief executive, “your days are numbered.”