WHICH of the world’s tech giants boasts the fastest-growing computing cloud? Many would guess either Amazon or Google, which operate the world’s largest networks of data centres, but the correct answer is Alibaba. In 2016 the cloud-computing business of the Chinese e-commerce behemoth grew by 126%, to $675m. Growth is unlikely to slow soon. Simon Hu, president of Alibaba Cloud, wants it to “match or surpass” Amazon Web Services (AWS) by 2019.

That is a stretch: AWS is estimated to have generated revenues of about $17bn in 2017. But Alibaba’s cloud (known locally as Aliyun) is one of a thriving group: China’s cloud-computing industry as a whole is growing rapidly. Even more intriguing than its speedy expansion is the fact that China’s cloud is different to that of Western firms in important ways.

The technology that China’s cloud-computing providers use is not so dissimilar. Indeed, the fact that Western tech firms have released much of the necessary code as open-source software made it easier for them to get going. “That brought us to the same starting-line,” says Xilun Chen, the chief executive of EasyStack, which builds clouds for many Chinese firms.

What varies is how the technology is used—a result of the respective roots of cloud computing. In the West the first customers were startups and only later, bigger firms. In China the cloud grew out of consumer services, including Taobao, Alibaba’s e-commerce marketplace, and the online games offered by Tencent, the second-biggest online firm. As a result, many cloud services are not yet ready for complex, mainstream corporate applications, says Evan Zeng of Gartner, a research firm.

As these services develop, however, there is huge potential. In the West almost all firms have long had sophisticated inhouse information-technology systems, which many are hesitant to abandon. In contrast, the IT of most Chinese companies is underdeveloped. “They can jump directly to the cloud,” says Ji Xinhua, the founder and chief executive of UCloud, a smaller but fast-growing cloud provider.

Another divergence stems from regulation. Whereas in the West organisations such as government agencies and financial firms often share data centres with other customers, in China there are separate “industry clouds”. Banks, for instance, are encouraged to sign up for services provided by outfits such as CIB FinTech, a spin-off from China’s Industrial Bank, because it reflects the latest regulations and makes things “more convenient” for regulators, in the words of its boss, Chong Chen. 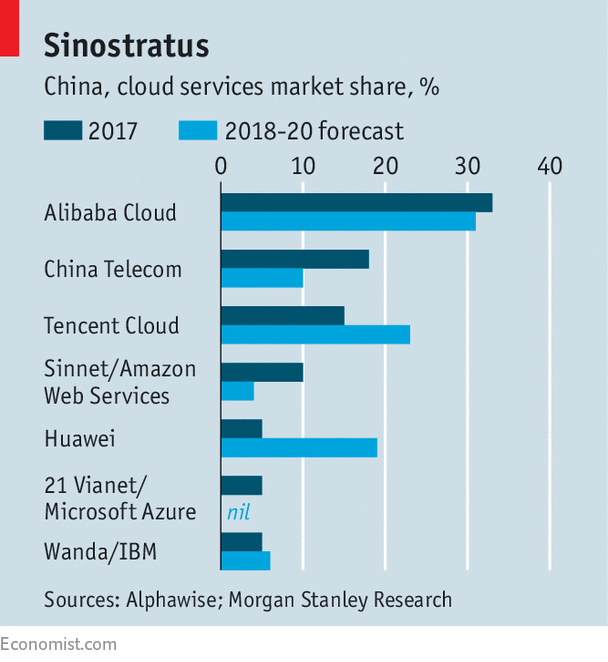 And whereas AWS, Microsoft and Google already rule the Western roost, the eventual cloud leaders in China are as yet unknown. Alibaba, China Telecom and Tencent are ahead (see chart), but that could change, says Mr Zeng. Huawei, a maker of telecoms gear, has ambitious plans. Smaller players, such as UCloud, may catch up.

Whichever firm ends up leading, Chinese and Western cloud providers are bound to run into each other—though not so much in their home countries as in such places as Europe and India. AWS and its main rivals have been busy building data centres abroad for some time, including in China. But Alibaba and Tencent are catching up. Alibaba, for example, operates a dozen computing plants abroad and will open another one this month in India, near Mumbai. “We have taken on Amazon on all fronts,” says Alibaba’s Mr Hu.

On the face of it, Western clouds should be able to stay ahead. They are still far bigger and have a technological edge, for instance in specialised chips to crunch reams of data for artificial-intelligence services. The reluctance to use Chinese technology is growing, and not just in America. But the Chinese competitors have some advantages of their own. They can rely on a huge home market in which foreign rivals are unlikely to make much headway, not least because of regulation. Laws force foreign cloud firms to have a Chinese-owned partner to operate local data centres. This adds complexity and puts them at a disadvantage. What is more, many subsidiaries of Chinese firms in other countries are likely to opt for a Chinese cloud.

And then there is geopolitics. Alibaba, in particular, will make a special effort, because it sees its cloud as part of China’s Belt and Road Initiative, President Xi Jinping’s ambitious infrastructure plan to connect his country with other parts of Asia, Europe and Africa. Mr Hu recently said that it is this initiative which made him confident that his firm will be able to surpass AWS. Perhaps, one day, the plan will be renamed “One Belt, One Road, One Cloud”.