JULY 4th is a day to celebrate American independence, first and foremost, but also to grill meat and swill beer. For American beer lovers in particular, the pint-glass runneth over in terms of choice. They had 5,000 breweries to pick from this year; 35 years ago there were under 100. Drinkers can enjoy time-honoured traditions, guzzling Budweiser to wash down all that sizzling beef, and newer ones such as sipping ale “finished with fennel, liquorice and anise” at Tørst, a Brooklyn bar.

For the producers of beer, the mood is darker. Though the number of brands has proliferated, the number of drinkers has not. Sales have been flat for a few years and 2017 has been especially slow so far. The volumes of beer sold at stores for the three months to June 17th were 1% lower than in the same period last year, according to Nielsen, a market-research firm. Brewers are now waiting with some anxiety for data about sales during the July 4th holiday. “The start of the year has been as bad as I can remember,” says Trevor Stirling of Sanford C. Bernstein, a research firm.

The dip is the result of two problems, one old and one new. First, the consumption of wine and spirits is growing more quickly than that of beer, and has been for nearly 20 years. Women are drinking more booze but often prefer wine and spirits. Men are turning to a wider range of drinks, including whisky and wine.

The second difficulty is that after years of effervescent growth, craft beer has gone flat. Volumes grew in 2016, but half as quickly as in 2015 (see chart). In the 13 weeks to June 17th craft-beer sales and volumes both dropped, by 0.7% and 1.5%, respectively. It may be that craft beer has reached its natural limit, both because there are only so many people who want to buy it and because there is only so much shelf-space that stores can provide. 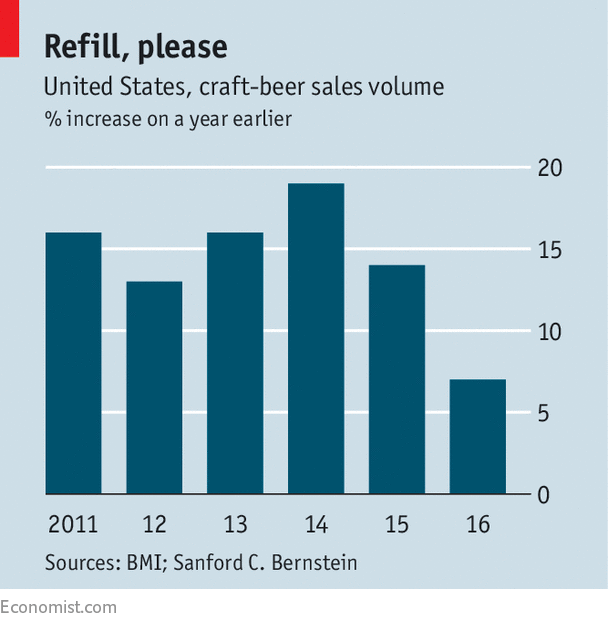 Olivier Nicolai of Morgan Stanley, a bank, notes that many distributors and retailers are weary of dealing with a jumble of brands, with some cases of beer going bad before they can be sold. It is hard for retailers to know which beers to stock because consumers, spoiled for choice, have proved fickle. Sales of Saison farmhouse beers, a spicy pale ale, for example, rose by 28% in 2015, according to Nielsen, only to fall in 2016.

As the market loses its fizz, debates are intensifying about whether independent beer companies can thrive in the shadow of behemoths such as AB InBev, which controls about half the American beer market. Last year the group, which is backed by 3G Capital, a New York-based private-equity firm, bulked up further by buying Britain’s SABMiller. By some measures AB InBev’s American division, Anheuser-Busch, looks less than intimidating. It is experiencing a much steeper drop in beer demand than craft brewers. In the four weeks to June 17th its Bud Light and Budweiser brands each saw volumes drop by more than 8%, declines not seen since 2009, in the depths of the financial crisis.

But small brewers still fret about its scale. It has recently shown interest in buying small brands as well as big ones, downing nine American craft brewers in just the past three years. Some small brewers worry that AB InBev’s craft brands will push aside their own. Bob Pease of the Brewers Association in Boulder, Colorado, which represents independent beer firms, argues that AB InBev’s expanding portfolio of beer makers and its relationships with distributors may mean that few rivals make it onto delivery trucks. His group introduced a new seal in June to help consumers find properly independent brewers.

João Castro Neves, head of AB InBev’s American business, disputes the idea that his company has a stranglehold on the market. “There is no way that Anheuser-Busch or anyone else can impose a beer on the consumer,” he insists. Brewers both large and small may find that increasingly hard to contest.