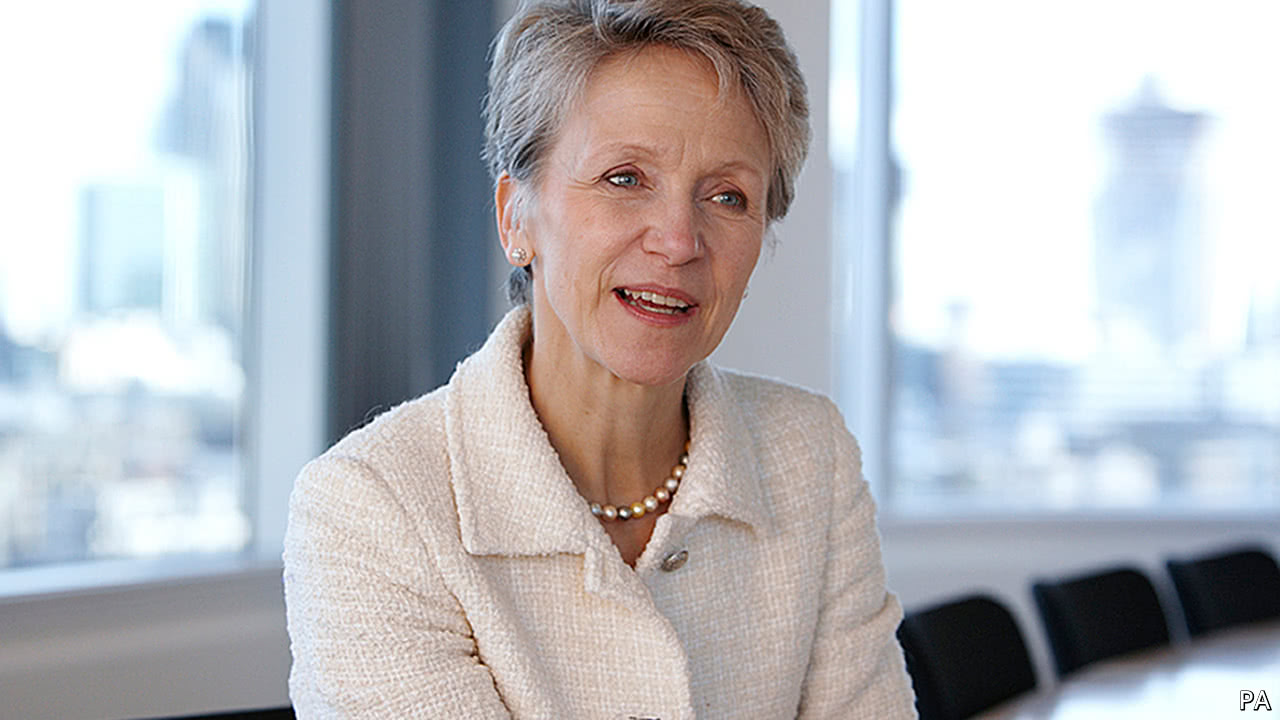 ROLE models for women in business are still too rare, not least in Britain. Last November an independent review backed by the government urged FTSE 100 companies to raise the share of women on their boards from 27% to 33% by 2020. Sadly, that push this week lost one of its leading champions, Helen Alexander, the deputy chair of the review.

Business had no better ambassador. She was self-effacing but a world-class networker—a winning combination that helps to explain, along with her intelligence and charm, why all sorts of firms flocked to have her on their board (from Northern Foods to Centrica, Rolls-Royce and the British arm of Huawei), to advise them (Bain Capital) or to chair them (the Port of London Authority and, more recently, UBM, an events business). In 2009 she became the first woman to be president of the Confederation of British Industry, the country’s main employers’ group.

But Helen had built her reputation in the media industry. From 1997 to 2008 she was chief executive of The Economist Group (the publisher of this newspaper), the company she joined as a marketing executive in 1985. During her tenure, profits soared and The Economist’s circulation more than doubled, to 1.3m.

Her success owed much to a leadership style that lacked fireworks and did not seek fame, but deserved more recognition, for both its humanity and effectiveness. Helen relied on a quiet wisdom: listening not lecturing. No name was ever forgotten, no thoughtful personal gesture was too small. For all the fashionable fascination with big strategy, she was unerringly sensible and, where need be, decisive: nothing foolish would happen on her watch. She treated her colleagues with respect, set an example of discipline and solid values (the diary always cleared time for family), and in return inspired confidence. “You can trust Helen completely,” was the word from one editor of The Economist to his successor.

Although she could seem quintessentially British (St Paul’s Girls’ School, Oxford University), she was also thoroughly global. She loved travelling to the Olympic games, where the world came together in good-spirited competition. Her mother was Russian (with roots in Estonia), her grandmother had been Maxim Gorky’s lover; Helen’s MBA was from INSEAD in France and she was a stalwart of an annual Franco-British gathering called the Colloque. France awarded her the Légion d’Honneur in November 2015.

At her acceptance speech at the French embassy in London, delivered in flawless French, her one pause to collect herself came when thanking her husband and three children for their support in her battle against cancer, which had been diagnosed about a year earlier. Helen approached that struggle as she did all else: head on, admirably, a class act.