Investment in American infrastructure is falling 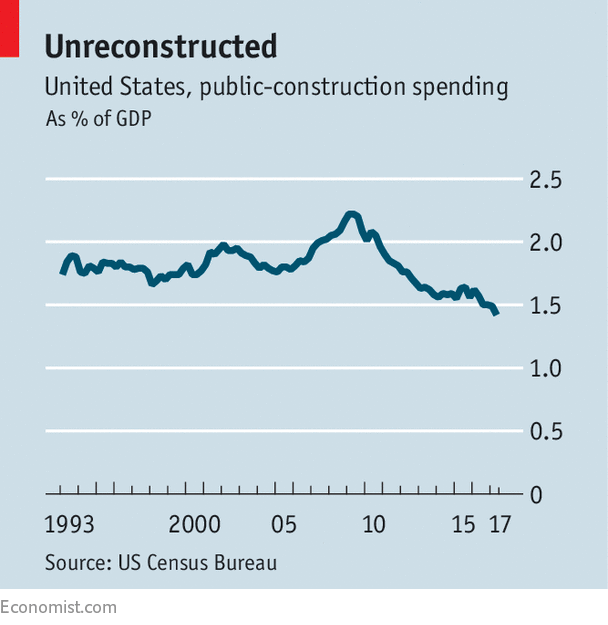 IT IS not a number to tweet about. President Donald Trump plans to plough $1trn of spending into America’s crumbling infrastructure. And a dearth of capital is not a problem: investors are keen on such assets. But investment seems to be falling.

Government infrastructure spending in the second quarter fell to 1.4% of GDP, the lowest share on record (see chart). According to Thomson Reuters, investment by American municipalities in the first seven months of this year, at $50.7bn, was nearly 20% below the same period in 2016. Private-sector infrastructure funds show a similar trend, according to Preqin, another data provider: deal volume in the first half of 2017 fell by 7.5%, year on year, to $36.6bn; the number of deals fell by a quarter.

Not long ago optimists were expecting an infrastructure-spending boom. In May Blackstone, a private-equity firm, announced with much fanfare a new $40bn fund for American infrastructure, with a $20bn investment from one of Saudi Arabia’s sovereign-wealth funds.

Yet the obstacles to investment in American infrastructure, particularly for private capital, remain daunting. Planning procedures are arduous. Many decisions are taken at state or local level by transport agencies that remain, in one investor’s words, “great bastions of political patronage”. Private ownership of certain types of infrastructure still encounters resistance. Many European airports are now private, for example, whereas American ones are public. So American private-sector investment hovers at a meagre $100bn or so a year, around four-fifths of it in energy.

The recent downward trend in both public and private investment suggests the administration’s lack of action has had an additional cooling effect. Anton Pil of J.P. Morgan points out that most large infrastructure projects in America need at least some federal funding to succeed. Unless the federal government leads the way, there is unlikely to be much new activity.

Even if the administration does set an example, a further difficulty is the shortage of investable projects, particularly big-ticket ones. Mr Pil’s team has been making deals as small as $100m, for instance in small solar farms; large-deal opportunities remain rare, he says. It is easier, it seems, to raise money to invest in infrastructure than to spend it.