Not even “The Last Jedi” will reverse Americans’ retreat from cinemas

THE new “Star Wars” film opens this week. “The Last Jedi” arrives in cinemas in time to boost expected ticket sales for the year to about $11bn in America, only slightly down from last year’s record. But the American film industry is in trouble. Tickets sold per person have declined to their lowest point since the early 1970s, before the introduction of the multiplex. Expensive flops have prompted studio executives to complain that Rotten Tomatoes, a ratings website, is killing off films before their opening weekends. The studios count on remakes and sequels to attract fans; such films account for all of this year’s top ten at the box office.

It may get worse. Americans are losing the film-going habit as new sources of entertainment seize their attention. Netflix and other streaming services have made it more convenient to watch movies and TV programmes anywhere, on internet-connected TVs, tablets and smartphones. Apps such as Facebook and YouTube are fine-tuned to keep users gawping. Americans spend more than eight hours a day on their various devices, compared with just over four hours a day on TV in 2002, according to Nielsen, a research firm.

That leaves little room for the cinema. Americans are on track to have bought around 3.6 movie tickets per person by the end of the year, down by 30% from 5.1 in 2002. They pay $8.93 for a ticket, 54% more than 15 years ago, which means, for now, higher total takings, but attendance is expected to decline further. Frequent filmgoers—those who go once a month or more—have dwindled, from 28% of North Americans in 2002 to 11% in 2016, according to the Motion Picture Association of America. The average American goes to the cinemas only to take in a big-budget spectacle or the occasional buzzy hit.

This shift in how people consume entertainment has also changed how it is made, further boosting the allure of the couch. Competition for subscribers among Netflix, Amazon, HBO and other pay-TV services has substantially increased investment in television series and films made for home viewing. Why go to the cinema when you can binge-watch “The Crown” and “Stranger Things 2”? MoffettNathanson, a research firm, reckons that Netflix’s production of films that never reach the big screen will reduce movie ticket sales in America by $300m-1bn a year. 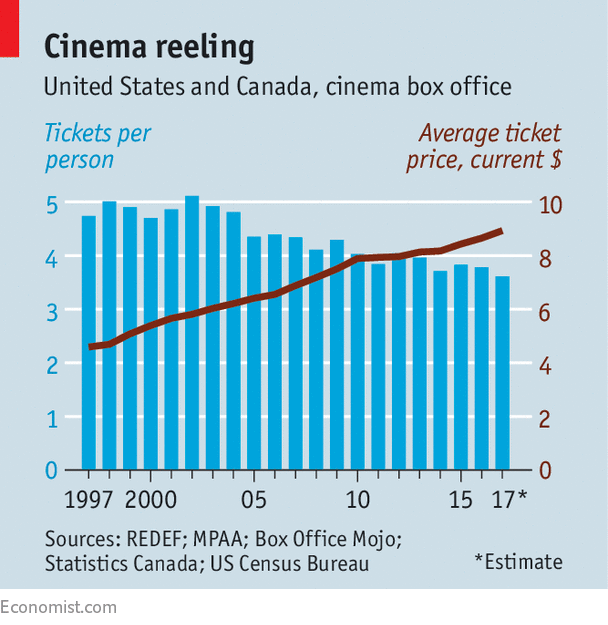 With the exception of Disney, profits are stagnating. Last year the earnings before interest, taxes, depreciation and amortisation of the film studios at Fox, Time Warner, Universal and Viacom (Paramount) added up to $1.8bn, down from $1.9bn in 2010, MoffettNathanson estimates. Studios used to make a lot of money when consumers stayed at home, from DVD sales of their films, but no longer. When “Revenge of the Sith”, another “Star Wars” film, was released in 2005, retail sales, rentals and downloads of all films totalled $25bn, with the studios taking fat profit margins. That market collapsed to $12bn last year, according to The Numbers, a website. Streaming revenue is on the rise, but less of that money goes to the studios. (Disney is likely to buy Fox in part to bulk up its own streaming service, which it plans to launch in 2019.)

Studios rely increasingly on international markets for box-office returns, especially fast-growing emerging markets such as China. China’s box office is expected to grow by more than 20% this year to about $8.3bn, and could surpass America’s by the end of the decade. The country added more than 1,600 cinemas last year—more than four per day. In America, some exhibitors have invested heavily in upgrades, such as recliner seats, to attract customers. Others have sold out of the market. That may have been wise. AMC Entertainment, a large North American chain in which Dalian Wanda Group of China holds a majority stake, has been on a spending spree to acquire smaller chains. Its share price has fallen by 55% this year.

Studio and cinema executives argue that the secular trend in American film habits is less about decline than a change in tastes. Jeffrey Katzenberg, a former head of Disney’s film studio and co-founder of DreamWorks Animation, observes that American film-going has evolved from a “blue collar egalitarian” habit to a more “upscale” experience, at cinemas with luxuriant comforts and IMAX and 3D screens. That may be true, but there is a limit to how long new technology can justify rising ticket prices for the silver screen.

Source: economist
Not even “The Last Jedi” will reverse Americans’ retreat from cinemas