Complaints against America’s airlines are rising

LAST year, Bob Fornaro, the boss of Spirit Airlines, talked of the effort his firm had made to reduce the number of customer complaints. The ultra-low-cost carrier, dubbed the most hated airline in America by Bloomberg, had long been ranked as a primary purveyor of passenger pain, regularly propping up lists that rate airline service. Alas, Mr Fornaro’s efforts seem to have gone unrewarded. Complaints per passenger remain easily the highest of any of the big American operators. In fact, as our chart shows, things seem to be getting worse. 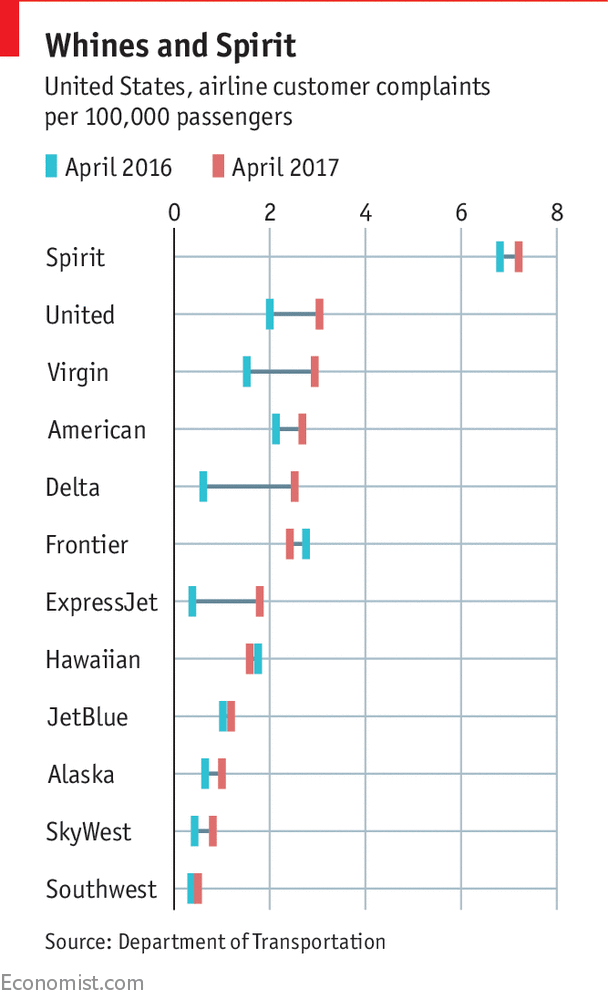 One consolation for Spirit is that the same is true of nearly all its competitors. Of the 12 biggest carriers in the country, only Hawaiian saw a (tiny) decrease in complaints in April 2017, compared with a year earlier. Delta, Virgin America and ExpressJet saw the biggest rise in discontent, based on 12 broad areas measured by the Department of Transport, including cancellation and delays, bumping of passengers and rude or unhelpful employees.

Should this be a cause of concern for shareholders? Probably not. Despite passengers’ grumbles, Spirit’s operating margin is close to 20%, higher than Delta’s, American Airlines’ and United’s. In 2016 5.4m people flew with Spirit, up 13.4% on the year before.

Between them, North American airlines posted profits of $16.5bn in 2016, or $18.15 per passenger. The sad truth is that carriers have little incentive to be nice to their customers. First, as Spirit’s success goes to prove, flyers want lower fares more than they want better service. (For example, a quick check on Skyscanner suggests that airfares in July between Minnesota and Dallas are around 25% cheaper on Spirit than on American.) Second, even if flyers did want to shop around, the lack of competition would make that difficult. The biggest four carriers in the United States between them now control 80% of the market, compared with just 48% a decade ago, with near-monoplies operating from some big airports. Air fares are higher than in Europe, measured per seat-mile.

For evidence that carriers can more or less do as they please, look no further than United Airlines. In April this year it made headlines worldwide after a paying passenger was dragged semi-conscious from a flight to make way for airline staff. Then, in the same month, it managed to let a giant bunny die in its care. As PR disasters go, that is a hard pair to beat. The result? Passenger numbers grew, and its share price soared.