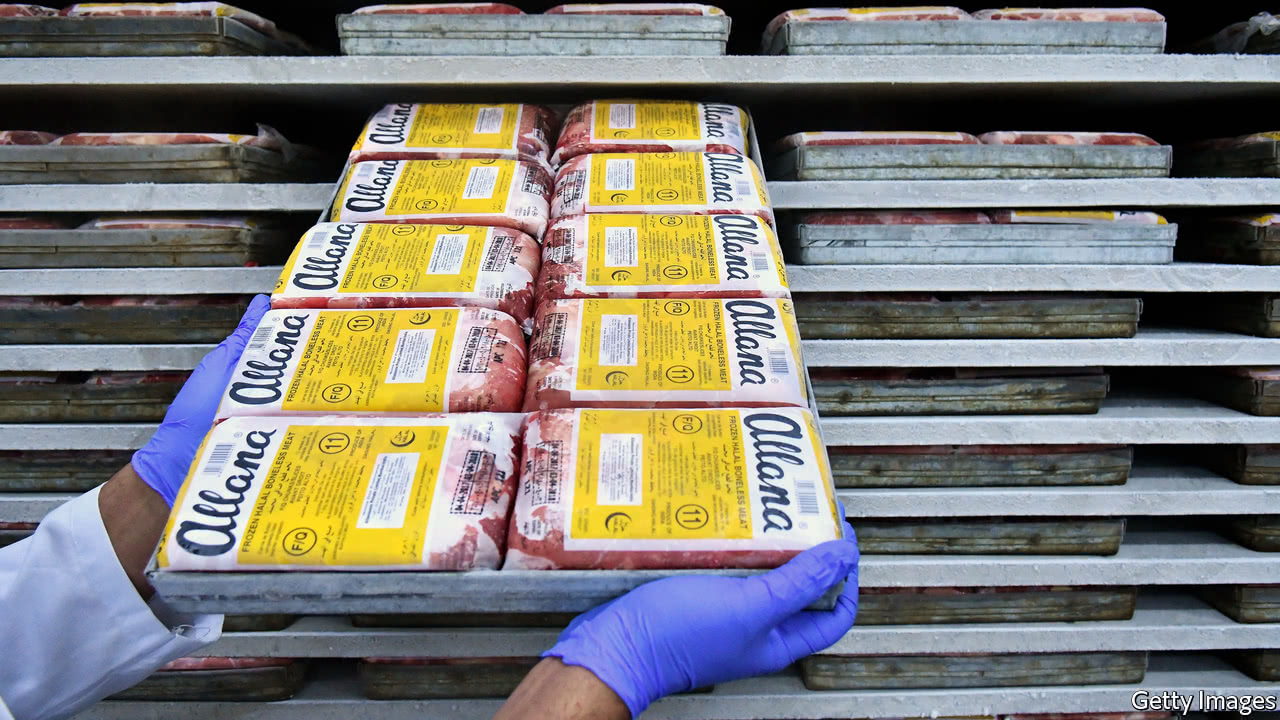 IN A corner of the state of Uttar Pradesh (UP) stands a gleaming building dedicated to animal slaughter on an industrial scale. Neatly mown lawns lead the way to a corral for hundreds of the curly-horned Murrah buffalo typical of the region. Nearby is a lorry-sized, stainless-steel machine in which the animals are killed. A Muslim cleric stands ready to oversee the incantation that ensures each carcass will be halal. Upstairs a microbiology lab monitors the progress of each beast through stages of chilling, deboning and deglanding. Each pile of disaggregated buffalo is then frozen solid and put into a loading chamber.

Such facilities are common in UP, although they do not advertise their whereabouts for fear of antagonising “cow vigilantes”, Hindu militants who harass and extort in the name of protecting cows, which a majority of Indians hold to be sacred. India earns around $4bn a year from exporting beef, and last year was the world’s biggest exporter of the product. But nearly all of it comes from buffalo, not cow.

A few dozen integrated meat companies have harnessed the potential of water buffalo over the past 15 years, developing the means to send herds of beasts from tiny farms through mechanised slaughterhouses and on to foreign markets. Firms such as Hind Agro, Allana and M.K. Overseas, plus dozens more, most of them crowded into the west of UP, have helped raise the value of India’s beef exports 14-fold within a decade—their worth is now equivalent to nearly a third of the country’s monthly trade deficit.

But the environment ministry has put the business on the chopping block. In May it ordered that cattle, including water buffalo, may no longer be sold in open markets for the express purpose of slaughter. The ruling was issued with immediate effect, on the ground of preventing cruelty to a class of animals that defines oxen and even camels, as well as water buffalo and cows, as “cattle”.

The ruling has prompted an outcry. Many note that the ban appears unconstitutional. India’s individual states, some of which allow cow slaughter, are objecting. It also seems biased against the country’s Muslims, who are heavily involved in the meat and tannery trades both as workers and owners. The Supreme Court heard a case against the ruling on June 15th.

The timing of the ban is particularly irksome for the industry, because it ought to be enjoying a golden period. Brazil, the second-largest exporter, has been hobbled by a meat-contamination scandal affecting JBS, the world’s biggest meatpacker. Shiploads of Brazilian meat have been waiting in the Pacific, as Asian buyers have had second thoughts.

India’s industry is well-placed to take advantage. High standards, regulatory and sanitary, have been enforced, partly because of local sensitivities about animal slaughter. Teams of foreign buyers considering the Indian market have brought extra scrutiny. Their inspectors are relentless: three teams of Malaysians spot-checked 32 plants in one fortnight in April, for example. Unlike the giant feedlot operations of the American Midwest, say, which tend to stink of manure and death from miles away, the high-tech UP abattoir sits near neighbours on other industrial estates, kept spotless and odour-free by an enormous workforce.

Unless the government’s ruling is overturned, however, such advantages are hypothetical. Farmers and traders have become even warier of transporting their animals within the UP plant’s 200km-radius catchment area. That is a reprieve for the buffalo, at least.