Takata’s bankruptcy is a result of familiar failings 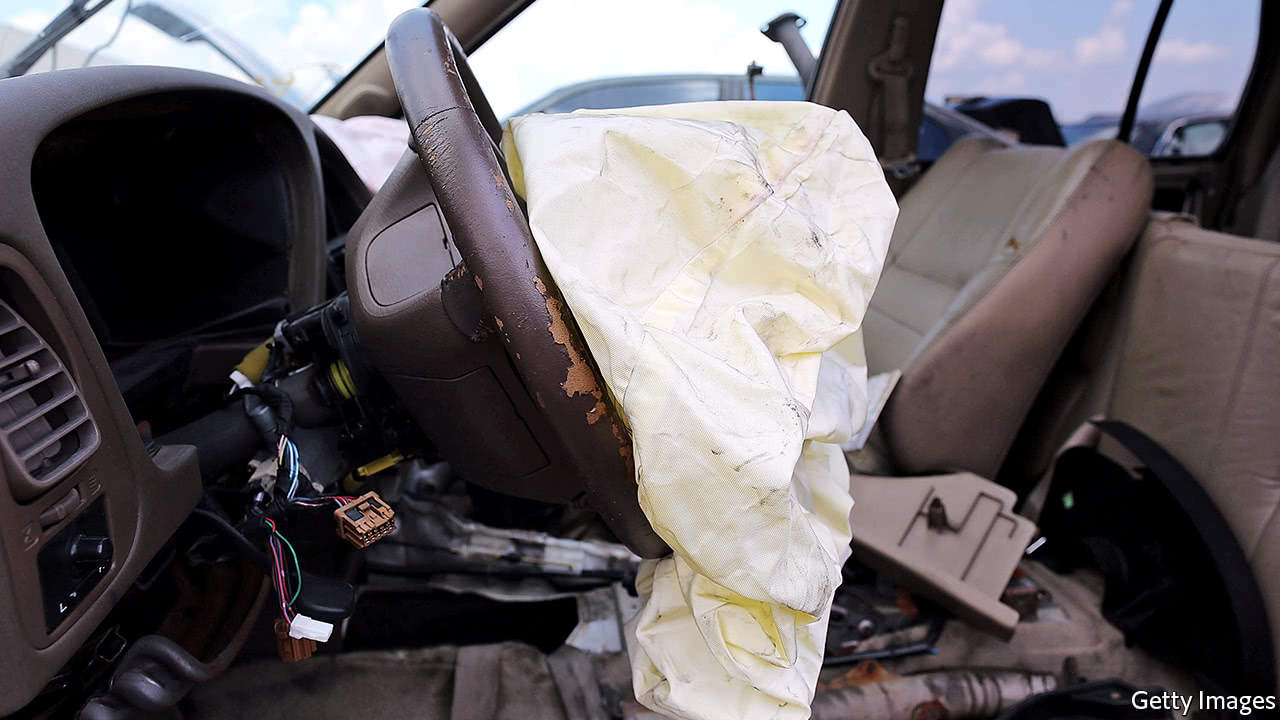 AIRBAGS are meant to make driving safer. But for years, some made by Takata, a Japanese firm, inflated with such vigour that shards of metal and plastic were launched at occupants of vehicles in even minor collisions, causing serious injury and in some cases death. The costs of the biggest-ever recall of vehicles, hauled back to correct the problem, and the associated lawsuits claimed another victim on June 26th. Takata itself filed for bankruptcy in America and Japan, and sold its surviving operations to a competitor, Key Safety Systems (KSS).

It is the latest in a series of self-inflicted wounds by Japanese corporate giants. Takata’s travails come on the heels of other disasters, including insolvency at Sharp, a formerly dominant consumer-electronics firm, and massive losses at Toshiba, a nuclear power and consumer-electronics empire. All suggest a recurring pattern of lack of transparency and leadership.

Takata’s bankruptcy is due to its airbags’ use of chemicals propellants which became unstable after long-term exposure to heat and humidity. But the crisis is also partly due to a lengthy concealment of a problem during which faulty bags caused at least 17 deaths and ten times as many injuries globally. The danger from exploding airbags was clear to Takata long before it came to wider attention, but instead of coming clean managers altered test results to hide it from customers. In a settlement in January of related criminal charges in America the firm agreed to pay $1bn in fines and compensation to carmakers and consumers, and admitted to a cover-up of the airbag failures from the early 2000s. American prosecutors have charged three long-serving managers at the firm with faking data to conceal the defect.

The settlement bill is dwarfed by the scale of Takata’s overall liabilities. Once the world’s second-largest maker of airbags, the faulty ones have been used by most of the world’s big carmakers. According to a court document submitted by TK Holdings, Takata’s American arm, this will eventually require the recall of 125m vehicles, around half of them in America. Of the 46m recalls issued in America so far, only a third of the vehicles have been put right. The cost of fixing the remaining cars worldwide and of lawsuits from injured motorists could be up to $25bn.

The firm is raising $1.6bn by selling unaffected units to KSS, a Michigan-based rival recently acquired by Ningbo Joyson Electronic, a Chinese auto-parts group. But carmakers are resigned to paying for most of the recall costs. Toyota and Honda have each set aside around $5bn. Who will pay compensation and damages from the outstanding lawsuits is unclear, as KSS has not taken on those liabilities.

Angry shareholders, at a final meeting on June 27th, singled out Shigehisa Takada, the firm’s chief executive, for blame. Masami Doi, a consultant and a former manager at Toyota, agrees that Takata has been badly led. The mindset of ignoring problems is not shared by all Japanese companies. Toyota reacted rapidly to a huge recall of cars in 2009 because of “unintended accelerations” by going on the offensive. Its openness and transparency included the sight of Akio Toyoda, president of Toyota, testifying before Congress. Mr Takada has been invisible. He swerved a showdown with America’s authorities. His press conference to announce the bankruptcy was his first since November 2015.

Source: economist
Takata’s bankruptcy is a result of familiar failings