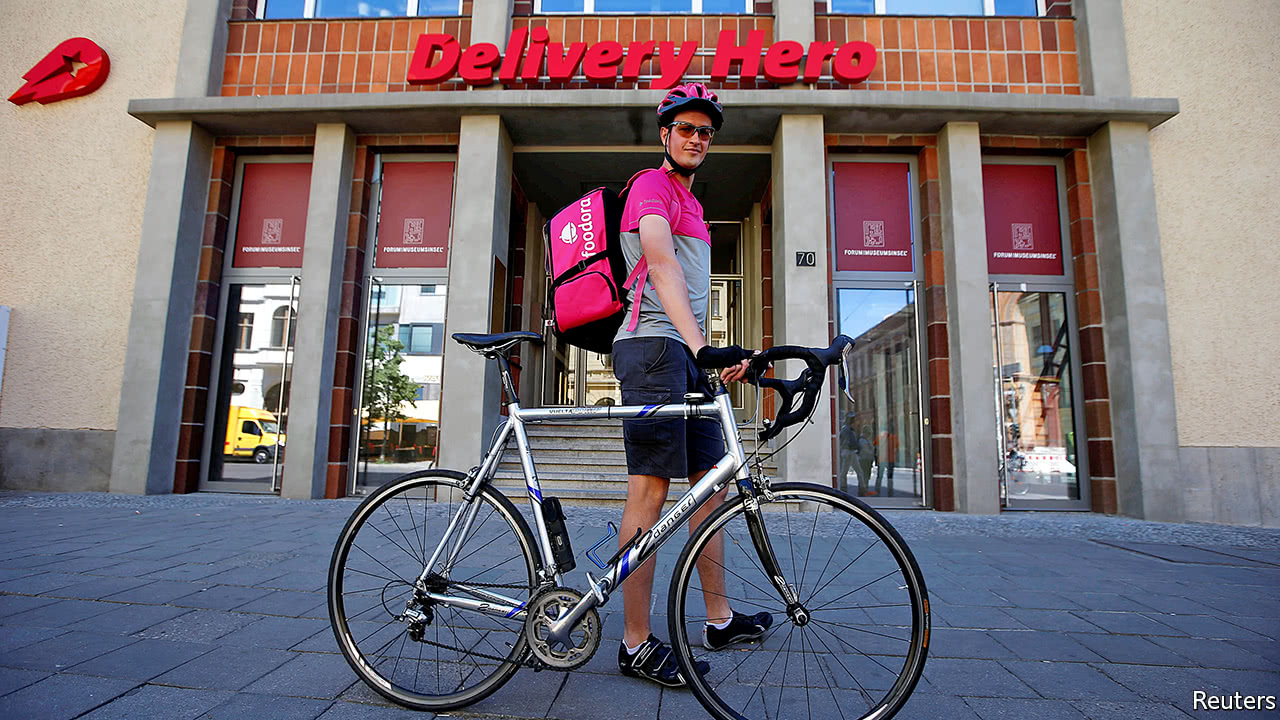 NIKLAS OSTBERG spent much of his youth as a competitive cross-country skier in Sweden. Then he ditched his skis for a less healthy cause. A decade ago he founded a firm that matched online pizza orders to restaurants. It grew into Delivery Hero, a Berlin-based service that last year dispatched nearly 200m takeaway dinners to customers around the world. It is in over 40 countries and claims to be the local leader in 35, including Germany.

The recipe has delivered in financial terms. The company’s initial public offering (IPO) on June 30th proved popular with investors and its share price has climbed since. Delivery Hero is now valued above $5bn, a handy premium over a valuation of $3.1bn in May, when Naspers, a South African online giant, invested in it.

It is not alone; shares in similar businesses have performed well after going public in recent years. Shares in Just Eat, a British company with a market value of £4.5bn ($5.8bn), have more than doubled since its IPO in 2014. The value of Grubhub, a food-delivery company based in Chicago, has risen by a third in the same period to around $4bn. The market capitalisation of Takeaway.com, a Dutch firm, is up by a third since it listed in September; it is now worth €1.6bn ($1.8bn).

What matters in food-ordering is gaining dominance in what analysts and Mr Ostberg agree are “winner takes most” individual markets. In any given country, consumers are unlikely to have more than one food-ordering app on their phones. For second- or third-placed competitors a reverse “network effect” occurs, says Mr Ostberg, in which they must constantly struggle to avoid losing restaurants and customers and margins tend to fall. Firms that dominate can enjoy profit margins of up to 20% per order, although Delivery Hero’s are only half that level.

Those margins are drawing online giants, Amazon and Uber, into the business. Their bulk and expertise in digital platforms and deliveries threaten the independent operators. Mr Ostberg puts a brave face on it and notes that the potential market for hot food globally could be worth $72bn, which leaves room for various firms to flourish in different parts of the world. He vows to take much of the capital raised from the firm’s IPO to invest in new technology.

Prospects for Delivery Hero depend on how smart Mr Ostberg’s team proves to be in this regard. The firm, which is part-owned by Rocket Internet, a Berlin-based company-incubator, is not a pure tech startup. It expanded partly through acquisitions and a merger late in 2016 with a rival, Food Panda (also controlled by Rocket). It organises deliveries through its digital platform, but managing fleets of cycle couriers is a complex business to scale up. Its wide exposure to emerging markets, from Saudi Arabia to Hong Kong, although offering growth, also brings lots of potential headaches because of local regulations and cultural quirks.

Mr Ostberg talks up the focus on tech, citing the firm’s experimental deliveries by drones and robots, plus its efforts on data-gathering and analysis to anticipate customer desires or resolve problems with logistics. But the firm is not as advanced as, for example, Zalando, an online fashion firm that grew out of Rocket Internet and floated in 2014. Florian Heinemann, who founded Project-A, a venture-capital firm, in Berlin and spent years at Rocket, praises Zalando’s team of 2,000 tech engineers for their skill in using data from customers. He does not see the equivalent, yet, at Delivery Hero.

The IPO should nonetheless boost Berlin’s profile as a startup hub, making it easier for other entrepreneurs to raise more capital in turn. It should also help Rocket Internet, shares in which have fallen in recent years as other firms it backed have failed to take off. “Opting for an IPO is a very hard route and there are very few positive examples in Germany,” says Ulrich Schmitz of Axel Springer, who oversees the media firm’s incubator of tech startups in the city. Later-stage funding can be especially hard for firms to raise, so anything that encourages investors to see clear exit routes is helpful, he says.

Mr Ostberg agrees, saying he dreams that his firm can grow to become a “category leader” and “inspire others” in the European tech scene. That is still an uphill task—but cross-country skiers, at least, are good at those.