Why British Airways customers might enjoy a strike by flight attendants 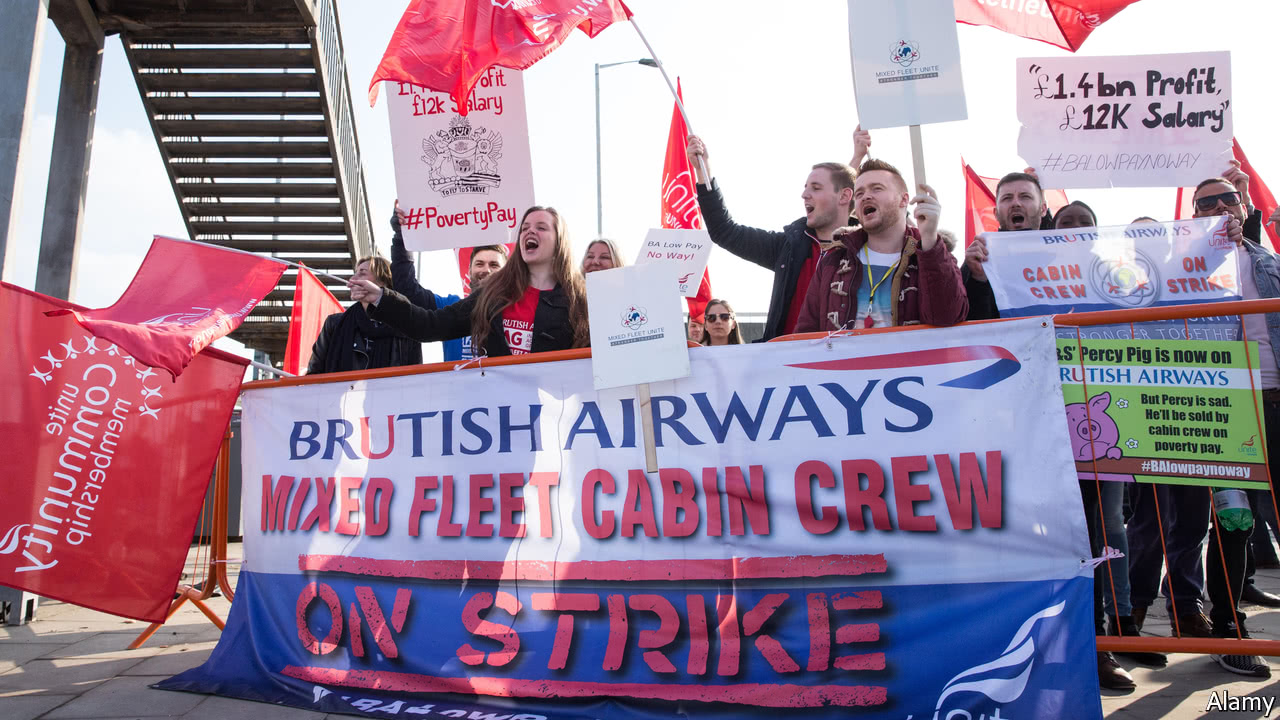 HOW do you best judge the success of an airline? One obvious way is to ask whether lots of people fly with it, and if it makes pots of money for shareholders. Judged on these metrics, few can quibble with the direction that British Airways is heading. Last year 42.1m people flew with the airline, nearly 10m more than in 2011. In 2012, IAG, the airline’s parent firm, posted a loss of €716m ($816m). In 2016 it made a profit of €1.9bn.

Shareholders, then, have little to grumble about. One of the ways that the airline has prospered is by focusing on its costs. When Willie Walsh, himself an avowed cost-cutter, moved from the hot seat at BA to running IAG in 2011, he appointed Alex Cruz from Vueling to carry on his work. As befits the former head of a budget carrier, Mr Cruz has continued to strip many of the frills from the once full-service airline.

Passengers and staff are not so happy with the changes. The airline has suffered four computer failures over the past year. The last one, in May, knocked out many flights for an entire weekend, leaving thousands stranded. The carrier denied this had anything to do with cutbacks. But the surly way in which BA staff—who were once famous for their friendliness—dealt with passengers at the time might well be put down to a newfound antipathy towards their employer. That can happen after years of job cuts and wage squeezes. Just ask flyers on United Airlines.

In the latest sign of rising tensions, some recently appointed cabin crew have begun a 16-day strike. They are protesting because their contracts are less generous than their predecessors’. Unite, the union that called the action, says the average pay for new attendants is £16,000 ($21,000); BA claims it is £21,000. On July 6th, Unite called a second two-week walkout, beginning on July 19th, just three days after the current strike is due to end.

BA says it will operate “99.5%” of services during the current disruption. That is because it has “wet leased” nine Qatar Airways jets to fly some of its short-haul routes (the Gulf carrier has a 20% stake in IAG). The irony is that, as a result, some flyers will once again be able to travel in the style for which BA used to be famous. Qatar is the world’s best airline, according to SKYTRAX, an influential ranking. British Airways is a lowly 40th and sinking fast. Far from being inconvenienced by the strike, some lucky passengers will get to sit on plush Qatar jets, which have fewer seats crammed into them, and be served by Qatar’s attentive crew.

Sadly, even if BA can extend its deal with Qatar to cover the ensuing industrial action, its customers should not to get too accustomed to such high standards. Once the dispute has been resolved, and the status quo returns, it will be time to get used to the old British Airways again. The carrier controls over half the slots at London Heathrow, Europe’s busiest airport in its most important city. Those slots cost many tens-of-millions of pounds on the open market. A chunk of BA’s, however, were given to it free of charge because of its flag-carrier status. In other words, it lacks competition. That means it can carry on slashing service in the full knowledge that a sizeable proportion of its customers have little choice but to put up with it. BA’s customers should enjoy their Qatar experience while they can.

Source: economist
Why British Airways customers might enjoy a strike by flight attendants