GROOT, a character from Disney’s film “Guardians of the Galaxy”, is usually mass-produced by the entertainment company as a small, collectable figurine and sold by retailers such as Toys “R” Us. But just before the release of the second film in the franchise earlier this year, Byambasuren Erdenejargal, a Mongolian enthusiast, noticed that people in a 3D-printing group on Facebook were searching for a computer model of Groot. So Mr Erdenejargal decided to create one. He spent four days perfecting the design and its printability before uploading his creation to Thingiverse, an online 3D-printing community based in New York. His digital model of the arboreal creature has since been downloaded (and probably printed in physical form) over 75,000 times.

Fans of popular TV programmes and films have long used arts and crafts to express their attachment to fictional characters. Etsy, an online marketplace for artisanal products, is full of Harry Potter-inspired golden-snitch charms. But a combination of 3D modelling, scanning and cheap 3D printers allows fans to reproduce items like never before.

At Thingiverse, one of many such sites, people downloaded 6.6m ready-to-3D-print designs in the 30 days to July 11th. Globally, over 424,000 desktop 3D printers costing under $5,000 were purchased in 2016, according to Wohlers, an American consultancy. As the 3D-printing community grows, companies that own well-known brands, such as media firms, are having to pay closer attention.

Some firms are taking a hard line against people copying their products. One option is to send intellectual-property “takedown” notices requiring people to remove their digital models from the internet. HBO, a subscription-TV firm owned by Time Warner, recently sent such a notice to a Thingiverse user who had 3D-printed an Iron Throne iPhone holder, in homage to its series “Game of Thrones”. 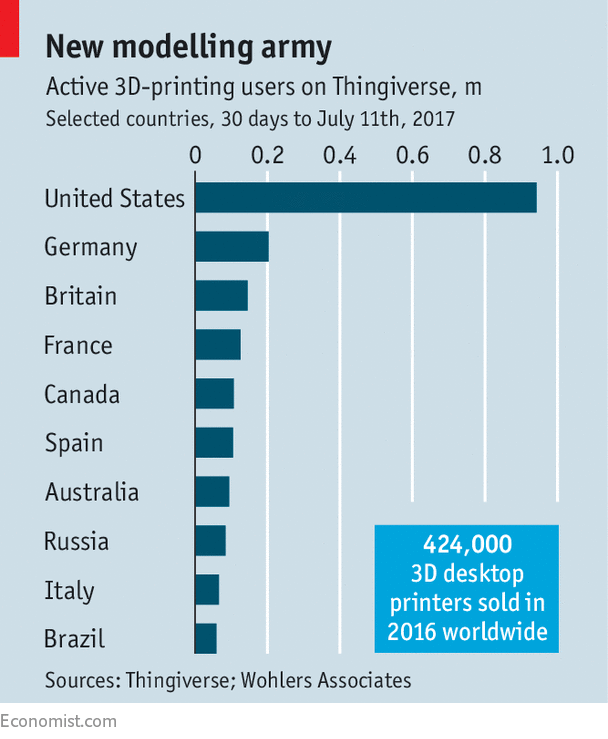 Disney thinks it has a way to foil computer scanners, which can generate a digital model of an item, by adding reflective material to its plastic products. But like some other firms, it is also experimenting with the technology itself. In 2016 it started selling its own 3D-printed versions of its Star Wars characters through Shapeways, an American online 3D-printing service, which allows goods to be printed on demand when ordered by people without their own 3D printers.

Other companies are using 3D-printing providers to create merchandise for them, too. Universal Studios, owned by Comcast, a media conglomerate, is working with Sculpteo, a French 3D-printing service. Clément Moreau, Sculpteo’s chief executive, worked with the studio to create a customisable 3D-printed version of the DeLorean time-travel car for the 30th anniversary of its 1985 film “Back to the Future”. Although Sculpteo is responsible for printing the cars, being able to customise its design gives fans greater control.

Skoda, a Czech carmaker owned by Volkswagen, is also working with Sculpteo to offer its customers small, personalised models of their own vehicles. Indeed, although only a fifth of Sculpteo’s total orders come from individuals wanting 3D-printing services, about half of the items it makes end up in the hands of consumers. That shows companies are using 3D printing as a manufacturing process and not just as a way to make prototypes.

Some brands are interacting more directly with modellers. A firm called MyMiniFactory, which is based in London, works on behalf of brands to source high-quality 3D digital models from individuals for corporate websites. This avoids valuable IP being displayed next to crummy models that may well fall apart when printed. Agustin Flowalistik, a Spanish 3D modeller, has collaborated with Capcom, a Japanese video-game firm, through MyMiniFactory. One of his most notable fan creations, however, is a series of nine geometric models of Pokémon created for last year’s 20th anniversary of the franchise, which is co-owned by Nintendo, another Japanese firm. Uploaded to Thingiverse, his models have now been downloaded hundreds of thousands of times in total.