The closing of American bank branches

WINDSOR, a community of 6,200 people two hours outside Albany in New York state, offers many of the amenities commonly found in a small town, including a bakery, a car-repair outfit and several restaurants. There is just one thing missing: a bank. The town’s only financial institution, First Niagara Bank, shut its doors in October.

Towns like Windsor are becoming ever more common in America. Since the financial crisis, banks have closed over 10,000 branches, an average of three a day. In the first half of 2017 alone, a net 869 brick-and-mortar entities shut their doors, according to S&P Global Market Intelligence, a research firm. Some fret that branch closures risk turning poorer neighbourhoods into “banking deserts”, cut off from current accounts, loans and other basic services. 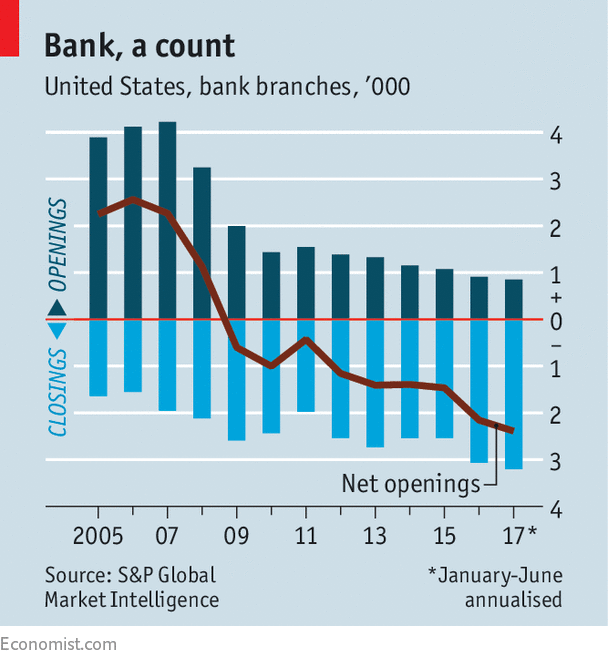 Not long ago, the notion that Americans might lack sufficient access to bank tellers would have seemed absurd. In the years leading up to the crisis, bricks-and-mortar branches grew by about 200 each month. By 2009, according to the World Bank, America had 35 branches for every 100,000 adults, twice as many as Germany. Since then, however, ultra-low interest rates and thickets of new regulations have squeezed bank profits. They have responded by trimming branches from a peak of about 100,000 to roughly 90,000.

Bank bosses maintain that they are “optimising” their branch networks to fit changing customer habits. But the cuts have not been made evenly. Data from the Federal Deposit Insurance Corporation (FDIC) show that the top fifth of all postal codes by household income lost around 3% of their branches between 2009 and 2016. During this period, the bottom fifth saw their branch numbers decline by 10%.

Community organisations worry that if branches continue to close in poor areas, many neighbourhoods could become reliant on payday lenders and cheque-cashing stores. In June the Federal Reserve Bank of St Louis estimated that there are now more than 1,100 banking deserts—defined as census areas at least ten miles from a bank—in America. That figure could easily double if small community banks continue to close. In May the National Community Reinvestment Coalition, a non-profit group, published a report showing that the number of banking deserts in rural areas has increased by 86 since the crisis.

The situation may be less dire than it seems. An analysis of FDIC data by The Economist shows that banking deserts, using the Fed’s definition, are home to just 1.7% of the population. For most of the country, banks are still within easy reach—typically just two miles away. Nine out of ten Americans live within five miles of a bank; half live within one mile.

Even if banks remain accessible to most, branch closures can take a heavy toll. “The loss of a bank has a significant impact on communities,” says James Chessen of the American Bankers Association. The cost is greatest for small businesses, which often lack audited financial statements and other information that can be analysed remotely. “At the local community level, so much of that business is driven by relationships,” says Chris Vanderpool of S&P Global Market Intelligence. “The farther out you are, the harder it is to manage those relationships.” A study in 2014 by Hoai-Luu Nguyen, now at the University of California, Berkeley, estimates that when branches close, new small-business lending falls by 13% in the surrounding area. In low-income neighbourhoods, such lending contracts by nearly 40%.

Even if financial regulation loosens and interest rates rise, branches are likely to thin further. JLL, a property firm, reckons that by 2027 the number of bricks-and-mortar branches could have declined by another 20%. The risk of widespread banking deserts may be a mirage. But small-business lending could still suffer.