The lessons of fidget spinners

YOU can spin it on your nose, chin, finger or tongue. Some include LED lights, others resemble a ship’s wheel, or even a skull and crossbones. The fidget spinner has three paddle-shaped blades attached to a central, weighted disc containing ball bearings. Flick a blade and it spins, for anything up to 12 minutes in an advanced version from Japan. It was originally designed to help calm children with attention-deficit hyperactivity disorder or autism, but swept the world earlier this year as a toy that everyone can play with.

Retail sales have undoubtedly slowed recently, says Mark Austin of ToyWorld, a trade publication—good news for the schools that have banned it as too distracting for pupils. But the spinner has created a new “fidget” category of toys. And the global toy industry, which was surprised by its success, has learned lessons.

The fad started in America in February. By May, all 20 of the top-selling toys on Amazon, an online retailer, were either fidget spinners or fidget cubes, a close relation. There have been many such crazes—who can forget the great loom-band mania of 2014?—but none that spread as fast. Frédérique Tutt, an analyst of the global toy market for NPD, a data company, says that it took just three weeks to cross the Atlantic and go global. No one knows exactly how many have been sold but NPD estimates that at least 19m were sold in the 12 rich-world countries that they track (including America and the biggest European markets) during the first six months of this year. Others put the figure at over 50m. 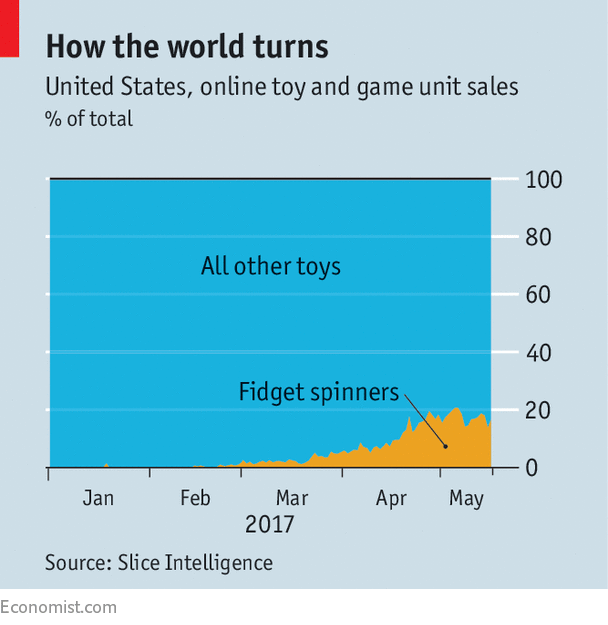 Big toy retailers, the usual arbiters of what sells, were initially caught flat-footed. Fidget spinners were a plaything that children themselves discovered and shared on social media, particularly on YouTube and Instagram. No person or firm had a patent on spinners, so with no patenting or licensing fees to pay, anyone was able to make one. They are produced in huge quantities in China, often by businesses that previously manufactured smartphone accessories. Others were made using 3D-printing. That has been a boon for small shops, which have been able to stock these unbranded goods from wherever they can find them.

Andrew Moulsher, managing director of Peterkin, a firm that imports toys into Britain, calls it a “watershed moment” for the business. Big retailers usually plan their inventory as much as 18 months ahead of peak seasons such as summer or Christmas; schedules are often tied to toy-filled films such as the Star Wars and Cars franchises. This is where most of their attention, as well as their marketing and advertising budgets, go. So it was easy for big retailers to miss the eruption of fidget spinners on the internet. (Subsequently they reacted as well as they could, says Mr Austin, ordering spinners in by air freight.)

Developing and manufacturing a toy can take even longer than inventory planning—up to three years. But now there is pressure to spot new fads and bring products to market far more quickly. After the fidget spinner, both manufacturers and retailers know they must respond faster to signals from social media. A Californian company, MGA, which was founded in 1979, spotted that children were watching YouTube videos of other youngsters opening presents; to take advantage of this “unboxing” trend, it managed to produce the L.O.L Surprise! doll, which contains several layers of gifts, in just nine months. It has been another best-seller.

The successor to the spinner may be the roller, an oblong-shaped object weighted at either end. Mr Moulsher started importing Japan’s Mokuru brand of rollers into Britain in July. He has sold about 40,000. Learning from the fidget fad, he is hoping that the return of schools this month and a smart social-media strategy will see sales rocket. Teachers, be warned.