IN RECENT days China set the record for the world’s fastest long-distance bullet train, which hurtled between Beijing and Shanghai at 350kph (217mph). This was a triumph of industrial policy as much as of engineering. China’s first high-speed trains started rolling only a decade ago; today the country has 20,000km of high-speed track, more than the rest of the world combined. China could not have built this without a strong government. The state provided funds for research, land for tracks, aid for loss-making railways, subsidies for equipment-makers and, most controversially, incentives for foreign companies to share commercial secrets.

High-speed rail is a prime example of the Chinese government’s prowess at identifying priority industries and deploying money and policy tools to nurture them. It inspires awe of what it can accomplish and fear that other countries stand little chance against such a formidable competitor. Yet there have also been big industrial-policy misses, notably the failure to develop strong car manufacturers and semiconductor-makers. China is rolling out a new generation of industrial policies, directed at a range of advanced sectors, raising worries that it will dominate everything from robotics to artificial intelligence. That result is far from preordained.

Industrial policy is a touchy topic. In continental Europe and, especially, Asia, many have faith in the government’s ability to steer companies into industries they might otherwise shun. In America and Britain, faith tends to be supplanted by deep doubts. Governments, after all, have a lousy record in picking winners in fast-evolving markets. Yet most countries try to support some industries, usually through a mixture of infrastructure, tax breaks and research funding. What differs is the stress they lay on such measures.

China is unique in the breadth and heft of its industrial policy. For years the government concentrated on modernising what it classified as nine traditional industries such as shipbuilding, steelmaking and petrochemical production. In 2010 seven new strategic industries, from alternative energy to biotechnology, also became targets. And two years ago it announced its “Made in China 2025” scheme, specifying ten sectors, including aerospace, new materials and agricultural equipment, which are now at the heart of its planning. The various plans overlap; cars, for example, have appeared in every iteration. The result is a wide-ranging approach in which the government tries to shape outcomes in important parts of the economy, new and old. 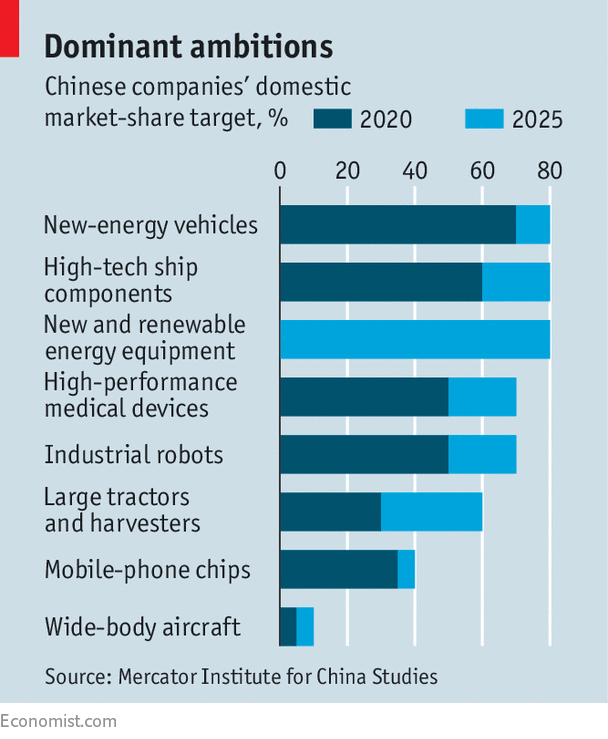 The “Made in China” plan, its latest industrial-policy craze, is derived in part from Germany’s “Industry 4.0” model, which focuses on creating a helpful environment through training and policy support but leaves business decisions to companies. China’s version is much more hands-on. By the start of this year, officials had established 1,013 “state-guided funds”, endowed with 5.3trn yuan ($807bn), much of it for “Made in China” industries. In August the Ministry of Industry and Information Technology unveiled a manufacturing-subsidy programme, spread across as many as 62 separate initiatives. Most contentiously, the government has laid out local-content targets for the various “Made in China” sectors (see chart). One plan features hundreds of market-share targets, both at home and abroad. “Clearly, this is no mere domestic exercise,” the EU Chamber of Commerce in China warned in a report this year.

The targets also illustrate one of the facets of Chinese industrial policy that has so angered foreign companies and governments: the disguising of state support. The World Trade Organisation (WTO) strictly limits local-content rules. But China’s market-share targets are primarily contained in semi-official documents, such as a blueprint published by the Chinese Academy of Engineering. So the government can claim that these are simply industry reports, not official targets. But in the Chinese system the line between government-backed industry estimates and official guidelines is easily blurred.

Similarly, foreigners have long complained that China hides much of its illegal state aid. Since 2011 America has formally requested information about more than 400 unreported Chinese subsidies. “China learned how to game the system,” says Tim Stratford, a former American trade official responsible for dealings with China. “The WTO is not designed to deal effectively with a huge economy that has, as the core of its development strategy, industrial policies across a wide range of sectors.” Frustrations at the WTO’s inadequacy in restraining China have led the American government to look at other mechanisms (see article).

Foreign competitors see China as a well-oiled machine and worry that they will lose business not just in China but around the world. Export powerhouses such as South Korea and Germany feel most exposed (see chart). But in fact the Chinese government’s record in promoting specific industries is patchy. Since the 1970s it has tried to develop semiconductors. But of the $145bn-worth of microchips China consumed in 2015, only a tenth were truly domestic; foreign technology remains superior. The car industry, too, has disappointed. To manufacture in China, foreign firms must take local partners. The government hoped this would lead to knowledge transfers. Instead, local firms, insulated from head-on foreign competition, have milked the joint ventures for profits and innovated little. 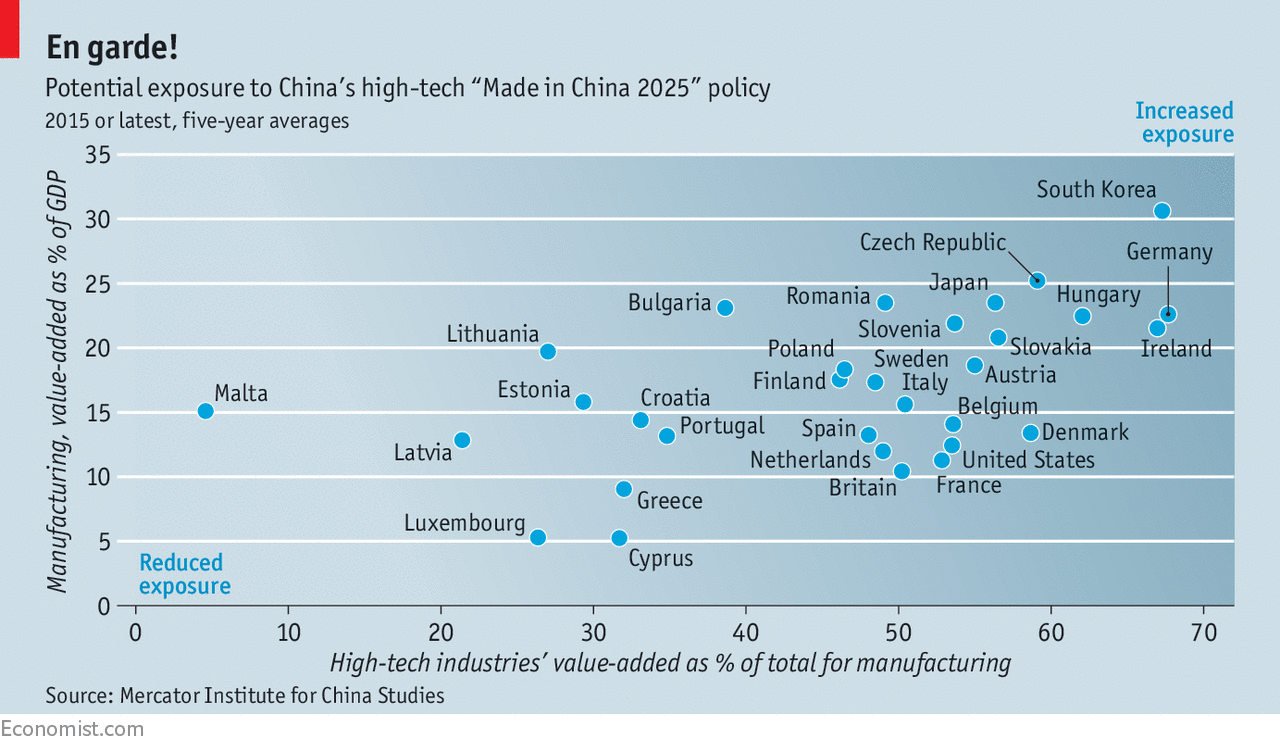 Moreover, in their zeal, local governments can go overboard. Some worry that “Made in China” sectors will end up facing gluts, like “old” industries where China is now cutting overcapacity, such as steel and coal. The Mercator Institute of China Studies, a Berlin-based research group, counted that, by late 2016, nearly 40 local governments had opened or planned robotics parks. The central government estimates that China will need nearly 150bn yuan-worth of robots over the next few years. According to the Mercator tally, local targets add up to roughly five times as much.

Yet when four factors—foreign technology, domestic abilities, market demand and government money—come together, Chinese industrial policy can be ruthlessly effective. The boom in high-speed rail began in 2004 when the government offered lucrative contracts to foreign engineering companies such as Germany’s Siemens and Japan’s Kawasaki so long as they shared their know-how. Some resisted at first, but eventually the lure of China’s vast market won them over, especially when they saw competitors getting a slice of it. With their prodigious engineering skills, born from years of trying to develop high-speed rail themselves, Chinese companies soon absorbed the technology. After a decade of laying tracks on an unprecedented scale, they have improved on it.

That success cannot be replicated in all ten of the “Made in China” sectors, not least because foreign companies are more guarded about sharing their secrets. But it would be rash to bet against China’s succeeding in at least a few of them.