HOW many days does it take to correct a misleading newspaper interview? Four, in the case of Paul Romer, the World Bank’s chief economist. On January 12th a surprising article in the Wall Street Journal alleged that one of the bank’s signature reports—on the ease of doing business around the world—may have been tainted by the political motivations of bank staff. The story was based on an interview with Mr Romer, who pointed out that Chile’s ranking in the yearly report had dropped sharply during the presidency of Michelle Bachelet, a left-leaning politician who took office for the second time in 2014. Chile sank so heavily not because doing business had become harder, but because the bank had repeatedly changed its method of assessment.

That method mostly entails answering measurable questions, such as how many days does it take to start a business, register a property or file taxes. The answers determine a country’s score (known as its “distance to the frontier”), and its score, relative to those of other countries, determines its global rank and bragging rights.

From 2014 to 2016, the bank made 12 big methodological changes, broadening some indicators and adding others. “Doing Business 2017” (published in late 2016) was, for example, the first in the series to ask how easily companies can obtain a refund or resolve an error after they have filed their taxes. In that report, Chile was ranked as the 120th easiest place to pay taxes, some 87 notches below its rank in the previous year. No other country fell so dramatically.

The data-gathering and analysis were overseen by a former professor of economics at the University of Chile in Santiago, adding to the suspicion of skulduggery. Supporters of Ms Bachelet, whose coalition lost the recent presidential election, were apoplectic. Some even suggested that Chile’s slide in the rankings had hurt confidence, undermining investment and jeopardising their political prospects.

Four days later, Mr Romer clarified his remarks on his blog, saying that he had not seen any sign of political manipulation and had not meant to suggest he had. But that may not be the end of the matter. Many people are predisposed to think the worst of the bank and its Doing Business reports in particular. Because they rank countries against each other, they have been both unusually influential, spurring governments to cut red tape, and unusually controversial. In some quarters, they are seen as scorecards for a deregulatory race to the bottom. Such critics may not accept Mr Romer’s apology at face value.

Other evidence may reassure them. First, the broadening of the tax indicators can be traced to an independent review of “Doing Business” published in 2013, before Ms Bachelet’s election. Second, not all of the methodological changes hurt Chile’s standing. After four of them, the country’s sub-ranking improved (see chart). Third, Augusto Lopez-Claros, who oversaw the report’s work from 2011-2017, is indeed a former University of Chile professor. But he is not Chilean and lived there for only two years in the early 1980s. 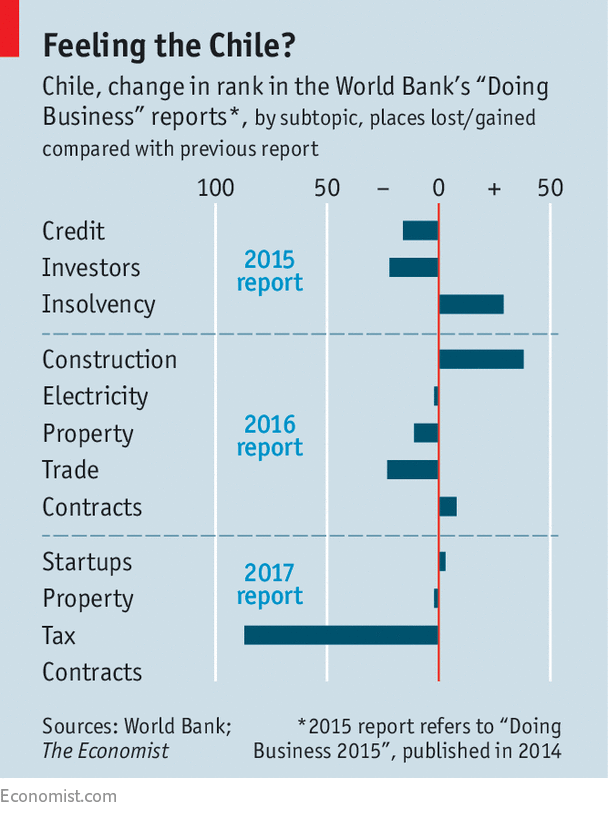 Moreover, the reports did little to highlight Chile’s purported decline. On the contrary: they play down changes in any country’s relative standing. Each new edition mostly avoids mentioning the previous year’s rank. Instead, the first and most prominent table in the report details three things: the country’s current rank, current score and whether that score (not rank) has improved since the previous year. This improvement is calculated using the same, latest method of assessment for both years. This table showed an increase in Chile’s score in each of the past four reports, highlighting an improvement in the ease of doing business under Ms Bachelet.

One final loose end does, however, need tying up: a previously unreported error in one indicator. Chile’s “post-filing” index (which reflects the ease of obtaining tax refunds and resolving errors) was recorded as 5.58 out of 100 in “Doing Business 2017”. According to the bank’s online database, it should have been 57.67. Consequently, Chile’s rank on paying taxes should have been 65th not 120th. But the country need not feel too singled out. The bank’s online database contains over 1,000 revisions and corrections for that report. “Doing Business” is not easy.