This chart may be predicting the bull market's demise

The bull market’s future may come down to just one economic chart.

According to economic forecaster Lakshman Achuthan, the trend between income and spending growth is signaling trouble is already here.

“These are two of the key coincident indicators of what defines the economic cycle,” he said Monday on CNBC’s “Trading Nation.” “What we see today is that real consumer spending growth has fallen to a four and quarter year low. That’s even lower than the lowest point we saw at the end of the 2015 slowdown.” 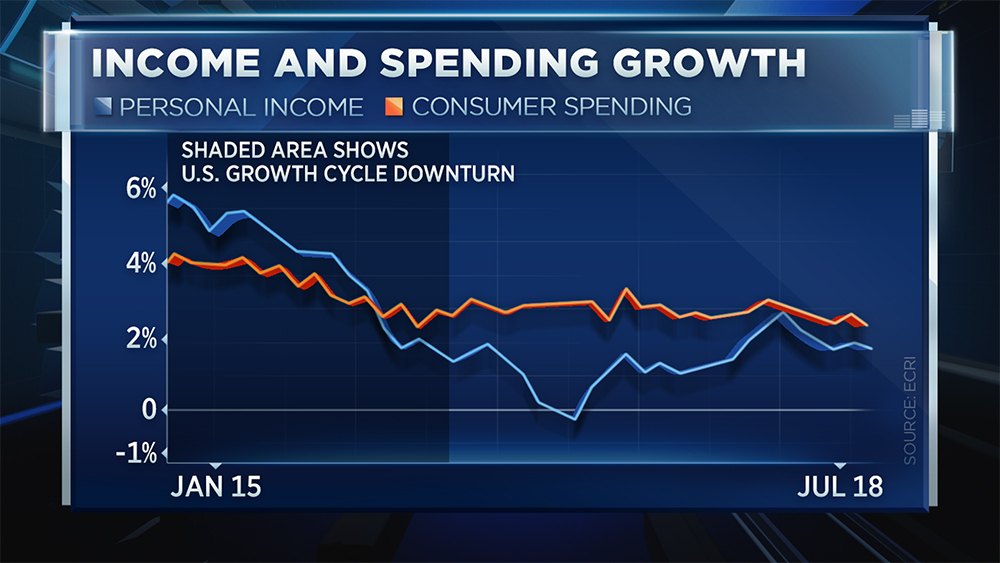 The co-founder of the Economic Cycle Research Institute is hyper-focused on it — calling it the single most important chart out there right now because it suggests inflation is already corroding spending power.

“Here’s 70 percent of the U.S. economy which is slowing,” he added.

It’s not the first time Achuthan has addressed the chart on “Trading Nation.” In late May, the former self-proclaimed super bull said the economy was “cruising for a bruising.” His latest data show the trend is deteriorating.

“It’s actually happening — kind of a stealth slowdown,” he said. “I think it becomes more apparent in the next quarter or two. … If it continues to slow, you have the window of vulnerability opening up where negative shocks that we can weather when the economy is growing becomes a lot more problematic in that kind of scenario.”

“Retail sales, the headline numbers that are making the rounds today [Monday], those are all nominal. So when you adjust for inflation, the shine comes off,” Achuthan said, adding real consumer spending growth is broader than retail sales.

Source: Investment Cnbc
This chart may be predicting the bull market's demise