Editor’s note: In the run-up to the 19th Communist Party of China National Congress, China Daily will cover a series of key projects and advanced equipment of national importance, showcasing the country’s huge improvement and relentless efforts at innovation.

The South-to-North Water Diversion Project, one of the world’s biggest, has also played an outsized role in other ways, like improving the environment and promoting pollution control, according to the project’s construction committee.

“The project has brought tremendous benefits to society, the economy and the environment,” the committee said in a statement.

The first phase of the central route, which has been channeling water 1,276 kilometers from Danjiangkou Reservoir to Beijing since 2014, has brought more than 2.28 billion cu m in total, helping to support social and economic growth, said Pan Anjun, a spokesman for the Beijing Water Bureau.

“Beijing’s water resources have risen from an average 100 cu m per capita to 150 cu m last year,” he said.

The diverted water now accounts for 73 percent of the capital’s daily water supply and is pumped to 11 million people, according to the committee, which is under the State Council.

The two long diversion channels have delivered 10 billion cu m of water as of June 6, and served over 93 million people in 33 cities in the arid regions of Beijing, Tianjin and the provinces of Hebei, Henan, Shandong and Jiangsu, the committee said.

In addition to easing their water shortages, these areas have also seen environmental improvements, especially in underground water.

Many cities have relied on underground aquifers as their main source before the arrival of the Yangtze water. In Beijing, the water table rose 36 centimeters in April compared with the same month last year, because of recharging from the diverted water. In some regions, the water table rose by as much as 8 meters, the committee said.

In addition, to protect the quality of water during diversion, the regions through which the channels run have strengthened monitoring and water pollution controls.

The Shandong and Jiangsu provincial governments cooperated in building 426 water pollution control projects between 2001 and 2010 for the eastern route, managing to cut pollution discharges by 85 percent.

More measures have been undertaken, as well, including improvements in the water quality monitoring network and the monthly releases listing water quality in major sections under a State Council plan.

By 2020, all 22,800 villages and 211 counties along the two routes will implement comprehensive pollution controls, according to authorities.

The South-to-North project, initially envisioned in 1952, consists of three planned routes – eastern, central and western – and able to deliver 44.8 billion cu m upon completion, the statement from the committee said. 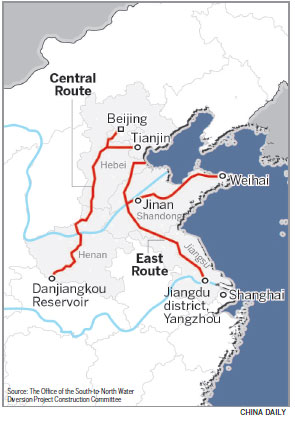