Canadian banks don’t face a crisis. They do face a strategic trilemma 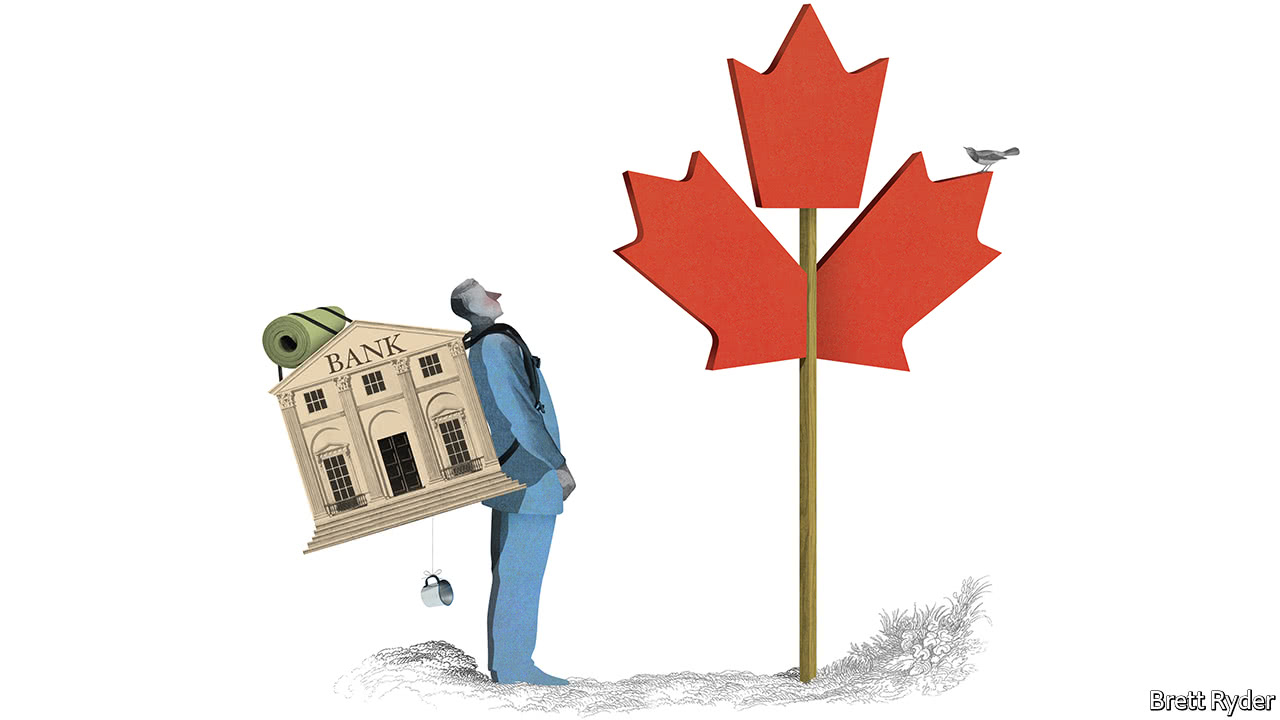 AS the global financial system was engulfed in crisis in 2008-10, only one set of banks in Europe and North America stayed serene and safe: Canada’s big five lenders. They were largely untouched by the madness south of the border and across the pond and kept churning out profits. After the crisis experts went on pilgrimages to Toronto and Ottawa to study the Canadian way. The country’s central-bank governor, Mark Carney, became a financial celebrity who was headhunted to run the Bank of England.

Canada’s banks quickly joined the select ranks of the industry’s superpowers, shooting up the global league tables in the aftermath of the crisis. Today three of them are on the list of the 20 biggest banks globally, measured by market value: Royal Bank of Canada (RBC), Scotia and Toronto Dominion (TD). RBC is worth more than Spain’s Santander, the euro zone’s biggest bank.

It has taken nearly a decade but Canadian lenders are back in the spotlight, this time accused of recklessness. The country has had two economic supercycles in the 21st century: a commodities boom which ended in 2015 and a housing boom which is peaking now. House prices are up by 76% in a decade. Over that period the big-five banks’ lending books have almost tripled in size and the ratio of household debt (mainly mortgages) to GDP has accordingly risen from 74% to 101%, one of the highest anywhere.

Rapid credit growth has been a reliable predictor of financial crises. The mood in Canada is jittery. In the past year the authorities have played regional “whack a mole”, imposing levies to tamp down wild speculation in the housing market, first in Vancouver, then in Toronto; Montreal may be next. In April a small mortgage-finance firm, Home Capital, suffered a run.

The banks’ bosses have two familiar lines of defence. First, Canada is not America. Its mortgages are designed more safely—a borrower has to repay a mortgage even if they ditch the house, for example. In America a fifth of mortgages were responsible for half of banks’ losses. Bankers argue that Canada’s debt is more evenly spread and that the cohort of poor, over-indebted households is relatively small. Culturally, Canadians are flinty, they say: Alberta’s economy has been walloped by the drop in the oil price since 2014, for example, but defaults there have barely risen.

As a result regulators reckon that the worst-case scenario won’t be too bad. For example, the state mortgage-insurance agency assumes a worst case of a 2% loss rate on mortgages, well below the cumulative loss rate in America of 5% in 2008-10.

The bankers’ other argument is that even if Canada faced the high loss rates seen in America, firms can take the pain thanks to their high capital and healthy profits. Schumpeter has kicked the tyres of the five big banks. Assuming a 5% loss rate on their mortgages and consumer loans in 2017-20, equivalent to C$70bn ($53bn), their core-capital ratios would stay above 10%. In reality the losses would be smaller, because half of mortgages are insured, mainly by CMHC, a state agency. This body has the capacity to endure its share of agony, using its C$35bn cushion of cash reserves and earnings from the insurance fees it charges lenders.

An American-style disaster might still have casualties. A sliver of the mortgage market is in the hands of small firms that are subject to fewer rules. And some banks have gorged more than others, probably assuming more risk. For example CIBC, the fifth-largest bank, has upped its mortgage book by 24% since 2012, compared with 15% at TD. (Bank of Montreal is the fourth-biggest.)

But there is unlikely to be a blow-up of the entire system. Instead the banks face a different problem. If Canada is up to its gills in debt, that means they can no longer expand in a spectacularly profitable market. Banks’ returns on equity (ROE) in Canada are 15-20%. The banks’ domestic profits have doubled, to C$24bn over the past decade, and have risen from 0.6% of GDP to 1.3%, higher than in America (0.7%) and Britain (0.3%).

After adjusting for dividends, the big-five banks could now generate almost C$20bn of surplus profits each year. If the domestic market cannot absorb it, the money must be returned to shareholders or invested abroad. The five firms already have about a third of their collective activity in foreign countries. To soak up all the extra profits they will need to invest at a pace that doubles the size of their foreign operations in four years.

Planting maple leaves around the world

Before the financial crisis many of the world’s banks treated their profitable domestic businesses as springboards. They used their highly rated shares to buy large foreign firms. This is how HSBC and Santander became global giants. But regulators and investors are jumpy about big banking takeovers.

The Canadians have so far followed a more modest diet of organic foreign expansion and smaller bolt-on deals. RBC has an investment bank ranked ninth in the world (by fees). In 2015 it bought City National, a Californian lender to corporates and rich individuals that has links to Hollywood—it helped to finance “The Silence of the Lambs”. Scotia is expanding in Latin America. TD is growing in America, and CIBC recently bought PrivateBancorp, a Chicago bank that specialises in commercial lending.

These adventures may succeed—the five banks’ foreign operations together make a passable ROE of about 10%. But they are not big enough to absorb all the surplus profits made at home. To do that the banks would collectively need to build the equivalent of another Goldman Sachs in the next four years, or a new JPMorgan Chase in the next decade. They would have to get much bigger in America or venture into Europe or to emerging markets.

So the big five face a “trilemma”—they could pump even more capital into frothy Canada, expand much faster abroad or admit that they can’t grow and return cash to investors. They seem likeliest to choose the second course. Even as investors fret about the mortgage mess at home, a set of opportunities—and risks—awaits Canada’s banks beyond their borders.