An industry shudders as Amazon buys Whole Foods for $13.7bn 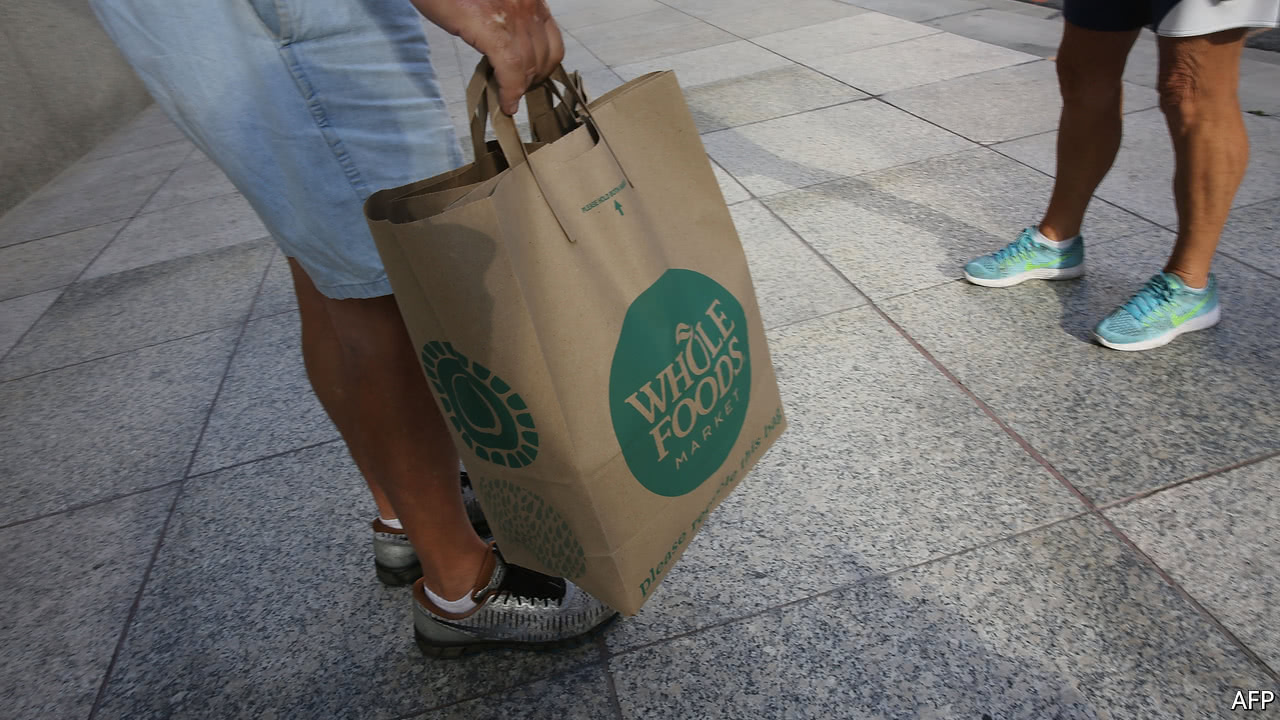 AMAZON announced on June 16th that it would pay $13.7bn to buy Whole Foods, a grocer known for its organic produce. On the face of it, the purchase might not seem to upset the grocery cart, either for Amazon or for the supermarket business. Amazon controls a measly 0.2% of America’s grocery market; Whole Foods has just 1.2%, according to GlobalData, a research firm and consultancy. By Chinese standards, Amazon looks slow: Alibaba, another e-commerce titan, bought a 32% stake in a Chinese grocer last year.

Nor is Whole Foods a juggernaut. It has about 450 stores in America, Britain and Canada, but American shoppers are now buying a wide range of organic foods at other grocers, without having to put up with Whole Foods’s steep prices or its hipster clientele.

Nevertheless, the deal marks a new era for Amazon. It has run a few experiments in physical retail, including bookstores in Chicago and in New York. In Seattle it is testing a small grocer, Amazon Go, where consumers can pick up food without having to stop at any checkout counter. Buying Whole Foods is a venture into brick-and-mortar shops on a different scale. The deal is ten times larger than any the e-commerce giant has pursued to date (Twitch Interactive, a gaming site bought in 2014, for example, cost less than $1bn).

That its first big deal in physical retail is a grocer underlines how successful the company has been in selling other types of goods online. Amazon has no need to buy a chain of electronics stores, for instance; it has already bulldozed into that category. Some clothing shops had predicted that consumers would never want to buy online—surely people would want to test a frock’s fit in stores, they argued. It turns out that many consumers do not. In 2016 a fifth of American clothes and accessories were bought online, according to Cowen, a financial-services firm.

Selling fresh food through the internet is a different story. E-commerce accounts for just 2% of America’s food-and-beverage sales. Even as Amazon has raced into other segments of goods, it has only tiptoed into grocery. Amazon Fresh, a grocery-delivery service that it started ten years ago, is still in only a handful of cities. (Prime Now, its two-hour delivery programme launched in 2014, is already in 31.) That’s because grocery’s margins are low, even when sold in stores, and its goods devilishly hard to deliver. Bananas bruise, meat rots, ice cream melts and a gallon of milk, if packed at the top of a grocery bag, will crush the muffins placed below.

Amazon has tried to attack these challenges, using machine learning, for example, to distinguish ripe strawberries from mouldy ones. But the acquisition of Whole Foods marks the start of something new, with the combined firms likely to have an outsized impact.

The most straightforward next step is for Amazon to unleash its usual arsenal of cash and innovation to enhance Whole Foods’s existing offering. For example, it might improve Whole Foods’s delivery service, now run by a startup called Instacart, or deploy the “Amazon Go” technology that lets customers leave the store without checking out.

Running Whole Foods, in turn, will help Amazon better understand and expand its overall grocery business, online and off. Whole Foods has a fantastic cold supply chain, which immediately gives the Amazon Fresh model a big boost, says Paul Beswick of Oliver Wyman, a consultancy. Whole Foods will also give Amazon more data on how consumers shop, how to spot promising local brands and how to expand private-label goods. Whole Foods’s store brand could in future be sold on Amazon.com. As with most of Amazon’s new ventures, the company will probably accept slightly lower margins and pursue a bevy of experiments, gathering data as it goes, then scale up the few that work. Years ago a deal that gave Amazon less than 2% of a market might not have raised eyebrows. Now competitors know Amazon well enough to be terrified.

The acquisition is troubling both for food startups such as Instacart and for big grocers. Walmart, with about 15% of the grocery market, remains formidable. Last year it paid $3bn for Jet.com, a challenger to Amazon. It has poured its cash into helping shoppers order food online and pick it up in stores. But the battle between Walmart and Amazon just intensified. Other grocers are even more vulnerable. They have struggled to keep up as Walmart cuts prices and competition online increases. On June 15th Kroger, the country’s second-biggest chain, reported declining like-for-like sales. In the hours after the deal was announced, shares for Walmart, Kroger and other retailers plunged.

The deal may spell trouble for other types of retailers, too, from home-goods stores such as Bed Bath & Beyond to drug stores such as CVS, sellers of detergent and other household products. Amazon is in the business of changing customer habits: once a shopper gets used to buying goods from Amazon, usually after joining its “Prime” free delivery programme, that shopper is likely to buy more and more goods from Amazon. Morgan Stanley estimates that those who subscribe to Prime spend at least three times as much on Amazon as those who don’t. That shoppers stock up on groceries so often explains much of the appeal of the market to Amazon. If Amazon can enmesh itself in that frequent habit of buying milk and bread, experience shows that customers will turn to Amazon for other types of goods, too.

There are already protests that owning Whole Foods will give Amazon too much power. The company accounts for about half of all new spending online in America. Amazon has already spread its tentacles into many parts of the economy, from retail to cloud computing and from entertainment to advertising.

However regulators are unlikely to intervene. The deal, after all, gives Amazon less than one-fiftieth of the grocery market. Indeed, it seems far more probable that a company such as Walmart, wary of Amazon’s dominance, might swoop in and make Whole Foods a higher offer (Amazon is paying about a 27% premium to the stock’s closing price on June 15th). Barring that, the deal will likely go through, Amazon expects, within the next six months.