Cisco adapts to the rise of cloud computing

WHEN John Chambers ran Cisco, the world’s biggest maker of networking gear, his hyperactivity nearly matched that of the high-speed switches and routers that made the firm’s fortune. He pushed Cisco into dozens of new businesses, from set-top boxes to virtual health care. He travelled the world preaching the virtues of connectivity. In interviews it was hard to get a word in edgeways. Conversations invariably ended on a restless question: “What should we do differently?”

Chuck Robbins, who succeeded Mr Chambers in July 2015, has two decades of experience selling Cisco gear and seems more comfortable talking about its core business than about diversifications. He avoids the limelight and comes across as almost shy. But he, too, is aware of the need to keep moving. “Networking is getting complex. We need intuitive networks that are secure and can learn and adapt.”

Different times require different bosses. Mr Chambers led Cisco to the top during the dotcom boom; in the early 2000s it became the world’s most valuable firm (see chart). Mr Robbins’s task is to keep it relevant as more and more computing moves into the cloud, which entails the provision of all kinds of services over the internet. On June 20th the firm announced a collection of new products which show how it is adapting: Cisco will focus on software and services, particularly the sort that automate the management of data networks. 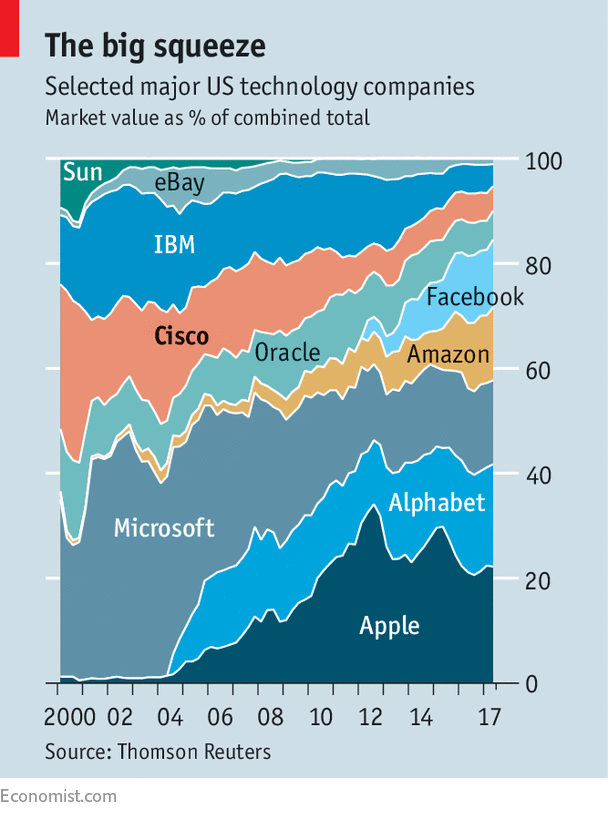 Cisco is best known for its switches and routers (the former are the central building blocks of networks, the latter connect them with each other). Although it embraced the internet’s open standards, Cisco came to dominate data networking for telecoms firms and other enterprises. Its boxes work well with each other and they can be centrally managed. Most firms’ network engineers know how to use Cisco’s boxes. Although its market share has declined in recent years, the firm still sells more than half of all new switches and routers, which together generate more than half of its annual revenue of about $50bn.

Owning the mightiest platform in networking, says Pierre Ferragu of Sanford C. Bernstein, a research firm, provides a defence against competitors, such as China’s Huawei and Arista Networks, based in California. It also makes Cisco less vulnerable to a problem bedevilling some makers of computing and storage gear, such as Dell, EMC or HPE: “commoditisation”, meaning they are losing pricing power.

But Cisco’s franchise is facing two threats. First, the more computing is done in the cloud, the less firms have to buy their own gear, including networking equipment. Instead of paying for an “end-to-end network” from Cisco, big cloud operators such as Amazon and Microsoft prefer gear that precisely fits their requirements. This is why Cisco’s cloud sales have disappointed, while more specialised vendors such as Arista have made inroads. The second threat is that software is increasingly important to how networks are run: that makes it easier for rivals to sidestep or overtake Cisco’s products.

Under Mr Robbins, Cisco has responded in several ways. It is offering tailor-made products to the big cloud providers. It has beefed up its software and services business and, to ensure more stable revenues, is making more of its products available as a subscription. Earlier this year the firm bought AppDynamics, which makes software to monitor the performance of corporate applications, and Viptela, whose programs manage networks, for $3.7bn and $610m respectively. Subscriptions and other recurring income now make up a tenth of Cisco’s revenues from products.

Cisco’s bet is that computing will never be fully centralised in vast data centres (ie clouds), but will live on many systems, big and small, says Rohit Mehra of IDC, a research firm. Cisco thinks that trends such as an explosion in the number of connected devices, also known as the “internet of things”, will almost certainly add to complexity, not reduce it.

The products introduced this week are designed for this kind of environment. They include software which lets engineers control hundreds of thousands of devices, programs to define who or what is allowed to access a network and services to detect malware in encrypted traffic. For the first time, Cisco will sell new switches that come with subscriptions which unlock these sorts of extra capabilities. Developers will get more tools to write applications for Cisco’s platform.

Being the firm that makes ever more complex networks safe and “intuitive”, to quote Mr Robbins’s new catchphrase, seems a sensible goal. It is already one of the biggest vendors of cyber-security products. It has enough money to pursue its ambitions: more than $70bn in cash.

But computing could yet become much more centralised, leaving less space for Cisco to knit things together. Big cloud providers will also try to get into the business of managing and automating networks. And Cisco has a mixed record of implementing its strategy. However well it does, Cisco is unlikely to achieve a goal set by Mr Chambers back in 2013: to become the world’s “number-one player” in corporate-information technology. The more realistic Mr Robbins is unlikely to articulate such an ambition—he would probably be happy if Cisco remained among the top five.

Source: economist
Cisco adapts to the rise of cloud computing