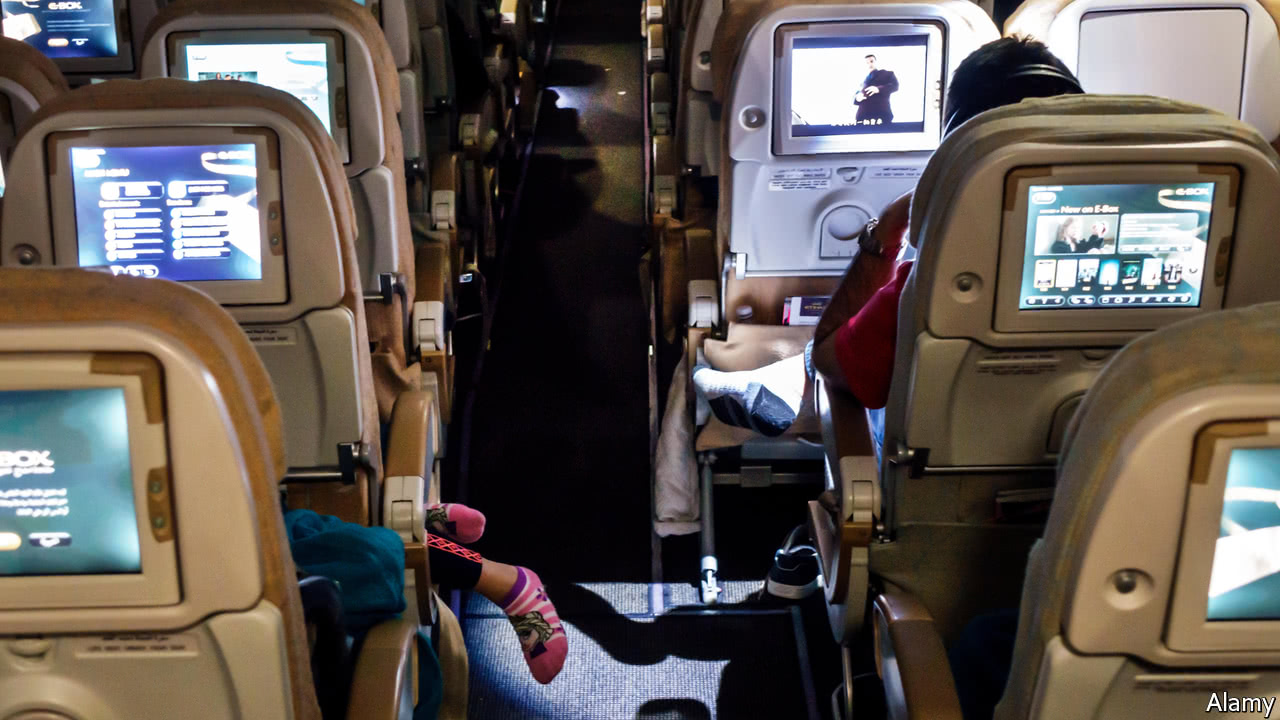 THERE are few things that airlines will not now put a price on. Even so, Etihad Airways has come up with an intriguing idea. The Adu Dhabi-based carrier is offering flyers the chance to bid to keep adjacent seats on a flight empty. Passengers can suggest the price they are willing to pay to block up to three berths, and the chance to stretch out a bit.

Anyone who regularly suffers the ignominy of economy-class flying knows that there is no finer feeling than discovering that a flight is half empty and that there is no need to sit cheek-by-jowl with fellow members of the hoi polloi. Most travellers can recount with glee a journey in which they found they had an entire row to themselves, could raise the armrests, and sleep soundly and horizontally for the duration of the flight. It is surely the only time that it is preferable to have a booked ticket in the middle column of seating. (A particularly pleasing anecdote can be found in “Skyfaring” by Mark Vanhoenacker, a British Airways pilot. He explains how crews sometimes have to fly empty 747s across the world, when they are in the wrong place for the schedule. In such circumstances the non-flying pilot gets his choice of seat in a cavernous, lonely cabin.)

On his One Mile at a Time blog, Ben Schlappig, a frequent flyer, suggests two drawbacks to the Etihad initiative. First, he says, “it may be tough for other passengers to understand that they can’t move to one of those seats, given that it’s empty”. That is true, although many airlines already enforce a similar policy when it comes to unused premium-economy seats. Nevertheless, the odd flashpoint seems inevitable. Second, Mr Schlappig notes that passengers who bid on empty seats, and then find out that a flight is underbooked, might resent paying for the space they could have got for free. Therein lies a conundrum. The fewer passengers on a plane, the better the chance to place a winning bid. Conversely, when the flight is 99% full, and the empty space would be most appreciated, there will be little prospect of success. The answer might be to keep an eye on how popular the flight is likely to be by checking the application that lets flyers choose their seats. And bearing in mind that at some point it will be a better bet simply to book a premium-economy berth.

Despite those small drawbacks, it seems a sensible initiative. As an Economist journalist, Gulliver dutifully believes auctions to be the best solution to many economic problems. So why does he have a heavy heart? Perhaps because the scheme is yet another way in which airlines are nobbling serendipity. Those occasional, unexpected treats, like finding a deserted row of seats on a transatlantic flight, are the things that stop one from falling out of love with the grind of air travel altogether.

Nonetheless, it is hard to criticise Etihad for trying to maximise its profits. The carrier is currently having a hard time of it, battling the laptop ban, low oil prices (which deters business trips to the oil-rich region) and some dud investments. And for once it is not only those at the back of the plane who are feeling the pinch. The carrier is also to stop offering first- and business-class passengers a free limo-service, at all the airports it serves other than Abu Dhabi. It has even opened its posh airport lounges to punters from economy class, for a price. These must be tough times indeed.