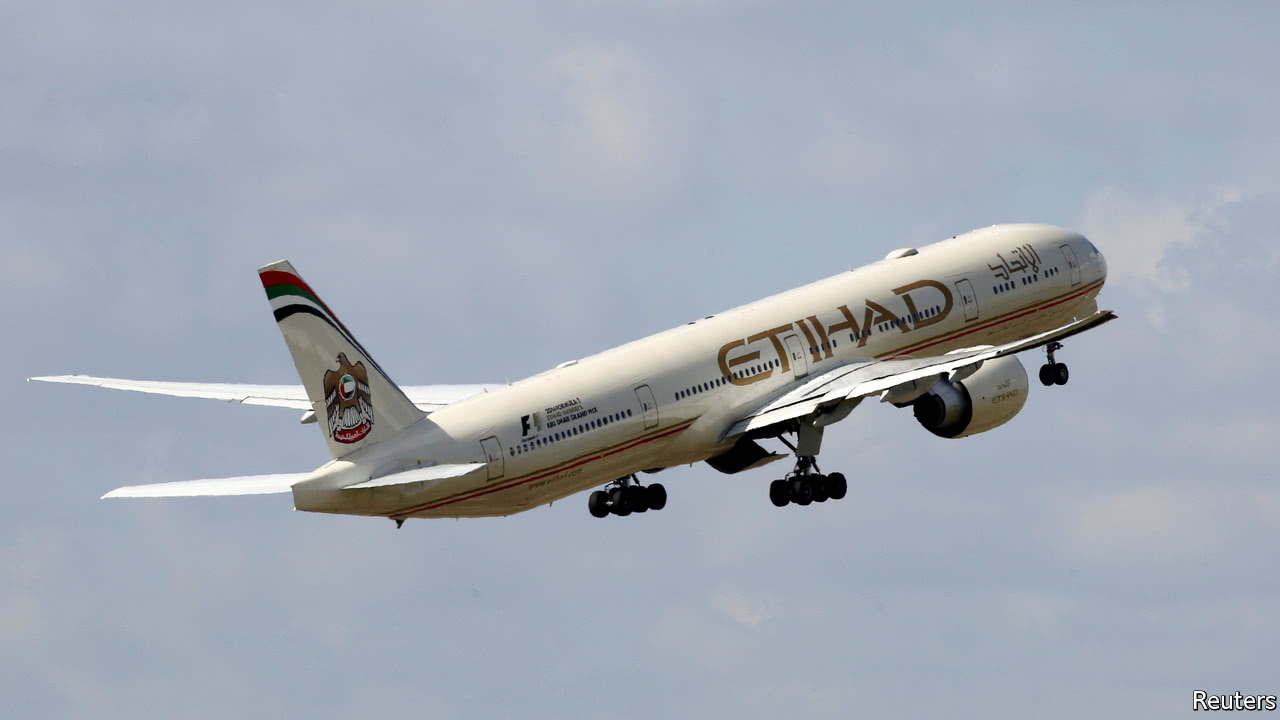 TWO not entirely unrelated pieces of aviation news have come out of the Gulf in the past few days. The first is that America has lifted its laptop restrictions on Etihad. The Department of Homeland Security (DHS) imposed a ban on large electrical devices in the cabins of planes flying from ten Middle Eastern countries in March, including from Abu Dhabi, Etihad’s base. Officials, it seemed, had got wind of a specific terrorist threat, possibly similar to the attempted downing of a jet in Somalia in 2016. On that occasion a passenger detonated a small explosive concealed in a laptop that was placed flush against the cabin wall. (Disaster was probably only averted because the man detonated the device too soon after take-off. The terrorist, who was sucked to his death through the resulting hole, was the only casualty.)

After months of mixed messages (at one point John Kelly, the homeland security secretary, suggested that the laptop ban was “likely” to be extended worldwide) last week the DHS decided instead to put the onus on airports to implement more extensive screening of passengers before they board planes. Abu Dhabi seems to have been the fastest out of the blocks. Others, including Dubai, the world’s most important international hub, will probably not be far behind.

The lifting of the ban is welcome news for Etihad, which runs 45 services a week from Abu Dhabi to six American airports. The airline has been having a hard time of it recently: in addition to the laptop ban, the low oil price has hit demand for travel to the Gulf. It is also suffering the financial implications of some dodgy investments, such as its 49% stake in Alitalia, Italy’s now-bankrupt flag-carrier.

It is difficult to judge how hard the ban had hit the airline’s traffic. Emirates, its Dubai-based rival, cut flights to America by 20% shortly after restrictions were introduced. The strong dollar and Donald Trump’s mooted travel ban played a part in that decision, but clearly some flyers were spooked by the idea of flying for 14 hours without access to their electronic devices. Lucrative business travellers, who rely on being productive while in the air, seemed particularly reticent.

Another troubled operator in the region is Qatar Airways. Not only has it had to deal with America’s laptop ban, it has also faced sanctions from neighbouring Gulf states. They accuse Qatar of supporting terrorism, among other things. As a result much of the airspace around the tiny kingdom has been closed, and many of its short-haul flights to countries such as Saudi Arabia and the United Arab Emirates have been grounded.

In a surprising turn of events, Qatar’s loss has been British Airways’ gain. Some cabin crew at BA are in the midst of a 16-day strike. Recently hired crew are angry that their contracts are stingier than those of their longer-serving colleagues. To minimise disruption BA has “wet leased” nine planes from Qatar Airways (which owns 20% of IAG, BA’s parent) for short-haul services. That involves not only making use of airline’s planes, but also its crew. It is apparently BA’s good fortune that Qatar suddenly had a spare few short-haul jets sitting about.