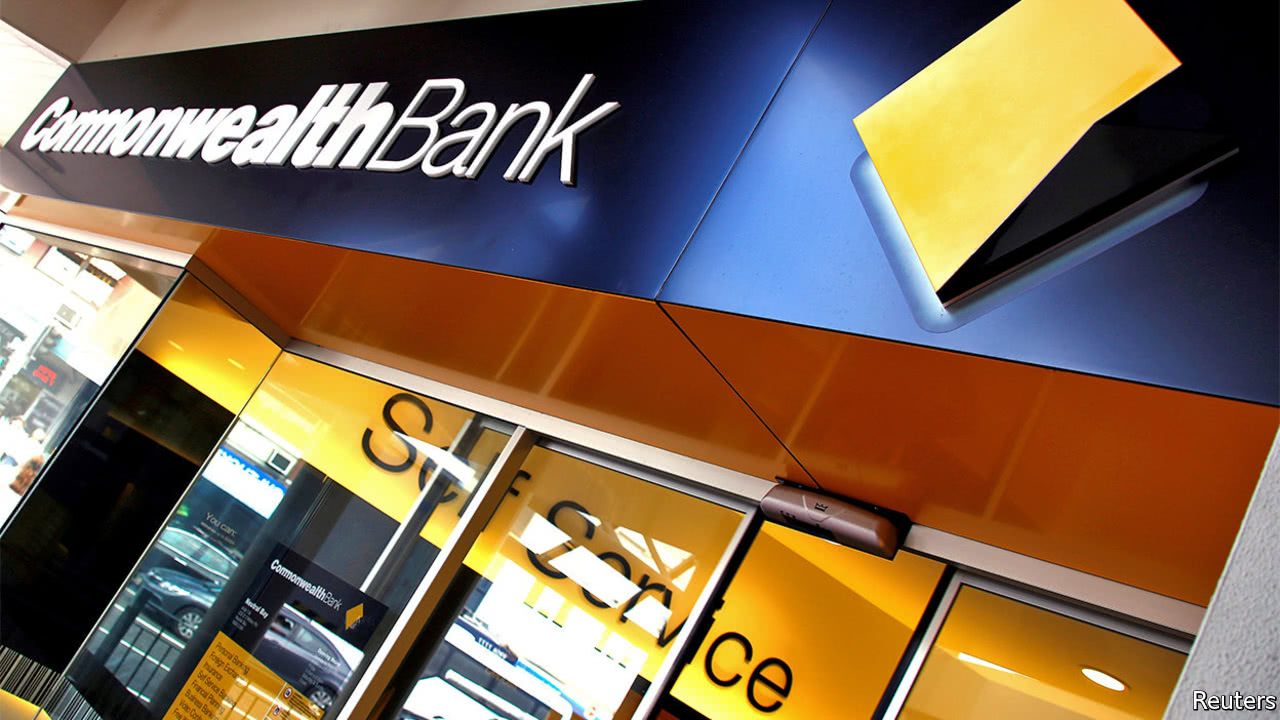 WHEN the Commonwealth Bank of Australia on August 9th reported its profit for the year to June—above forecasts and just shy of A$10bn ($7.9bn)—it faced questions about cashflows of another sort. Six days earlier the Australian Transaction Reports and Analysis Centre (AUSTRAC), a regulator charged with gathering financial intelligence to combat money-laundering and terrorism, had launched proceedings against it for “serious and systemic non-compliance”. Citing “collective responsibility” for the bank’s reputation, Catherine Livingstone, its chairwoman, has announced cuts to bonuses for Ian Narev, the chief executive, and others.

Founded 106 years ago, CommBank, as it is known, is one of Australia’s biggest banks. AUSTRAC traces its case to 2012, when the bank started installing “intelligent deposit machines”. They accept cash, let depositors stay anonymous and allow money to be switched to other accounts in Australia and overseas straight away. CommBank sets a ceiling of A$20,000 per transaction through the machines, but no limit on the number of daily transactions. Australia’s other three big banks—Westpac, Australia and New Zealand Bank and National Australia Bank—limit single transactions through their machines to about a quarter of that value.

Shifting money around this way has become increasingly popular—in some months CommBank’s machines have received A$1bn in cash deposits. The regulator says the bank took no steps to assess money-laundering and terrorism-financing risks from this deposit system until mid-2015, three years after it started.

The Anti-Money Laundering and Counter-Terrorism Financing Act obliges banks to report cash transactions above A$10,000 made through their machines within ten days. AUSTRAC claims CommBank failed to do so for about 53,500 suspicious transactions valued in total at A$625m. Some were linked to money-laundering groups under investigation by the police; a few even involved customers CommBank itself saw as potential risks for terrorism financing.

Deposits of A$27m into one account came from a drug syndicate, three members of which have been charged. The regulator says some CommBank accounts were used for “cuckoo smurfing”, a form of laundering money from one country to another without sending it across a border. It said the bank’s conduct exposed Australia to “serious and ongoing financial crime”.

Mr Narev admits CommBank made “mistakes”. The bank blames these on a software “coding error” linked to its machines and says it has complied with its reporting obligations since late 2015. Each of the 53,500 alleged contraventions could attract a fine of A$18m, leading to a theoretical total of nearly A$1trn. But the bank suggests they could all stem from the same cause, the one coding error, so the fine might not be catastrophic. It is preparing a defence statement for the Federal Court.

Many Australians resent bigger banks, believing that they put profits before customer service. Three years ago, a parliamentary committee criticised CommBank after revelations that some of its advisers had steered people into investments that soured. Malcolm Turnbull’s conservative government has resisted calls from the Labor opposition for a royal-commission inquiry into banks. Instead, in its latest budget it imposed a levy on Australia’s five biggest, to raise about A$1.5bn a year.

The CommBank drama will only aggravate public exasperation with banks. Scott Morrison, the treasurer, has warned Ms Livingstone that the government will “consider all options”, without naming them. Anna Bligh of the Australian Bankers’ Association, a trade body, hopes that the CommBank affair will be a lesson “for the entire financial industry”. Even Mr Narev concedes banks are “not exactly drawing on a deep reservoir of public goodwill”.