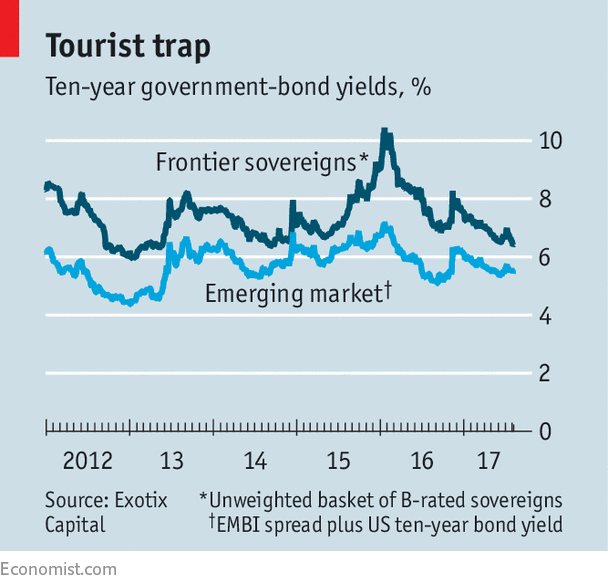 WHERE can you find a 7% interest rate on a sovereign dollar-bond? You would have to take a time-machine to the mid-1990s to find such a yield on a ten-year American Treasury. Alternatively, you could slip back a few days to August 2nd and bid for the $1bn of five-year bonds sold by the government of Iraq. The yield was expected to be 7%, but it was trimmed to 6.75% once orders rose above $6bn.

Such eagerness for hard-currency debt from a country still reeling from a civil war shows just how far bond investors will now go to get a decent yield. Oversubscribed issues for risky sovereign bonds have become almost normal. The Iraqi sale came just a week after Greece (whose privately held debt was partly written off in 2012) raised €3bn ($3.5bn) in its first bond sale for three years. In June Argentina was inundated with bids for its 100-year eurobond, as dollar-denominated bonds are known. Sceptics noted that Argentina had defaulted on its debts six times in the previous century, with the most recent such upset in 2014. Egypt, Ivory Coast, Nigeria and Senegal have also placed big eurobond issues this year. None enjoys a credit-rating that approaches investment grade, though the eurobond market is familiar with many of them. Ivory Coast, for instance, issued a bond in 2010 in lieu of unpaid debts. It proceeded to miss an interest payment the following year.

Bond investors are ready to forgive such slip-ups. They do not have much choice. The yield on ten-year Treasuries is 2.26%, not much more than inflation in America. A basket of high-yield corporate (or “junk”) bonds pays less than 6%. Yet despite a long period of low short-term interest rates in America, inflation is still quiescent. So the Federal Reserve seems unlikely to raise interest rates much further. “Investors have concluded that we’re not going to get meaningfully higher yields on safe assets,” says David Riley, of BlueBay Asset Management. In this context, lowly-rated sovereign eurobonds can look appealing. Indeed the weight of money has driven the average yield on such “frontier-market” bonds below 7%, according to Stuart Culverhouse, of Exotix, a broker (see chart).

The appetite for ever-riskier bets recalls the recklessness that led up to the financial crisis, which began a decade ago this week. What is different, though, is the absence of euphoria. Few seem to want to cheer the rally in risky eurobonds. But nor do they want to bet against it.

A common complaint is that rich-world central banks are to blame—for keeping rates too low and for studiously avoiding any action or statement that might unsettle the markets (and make investors more jumpy). Other culprits include low-cost “passive” fund managers and exchange-traded funds, which track a basket of government bonds, such as J.P. Morgan’s emerging-market bond index, known as the EMBI. Such indices are also a yardstick for the performance of many “active” funds, ie, those with discretion over what sort of bonds to buy and how much of them to hold. The growing influence of passive funds makes active investors less willing to eschew a eurobond issue that qualifies for the indices, however unsound, for fear of underperforming.

It is easy to suspect that this episode, like so many before it, will end badly, but hard to know exactly when or how. Frontier-market specialists sense a greater interest in their bailiwick from crossover (non-specialist) investors, also known as “tourists”, who are likelier to misjudge the odds of a default. And the reach for yield could always be stretched even further to local-currency bond markets, which are less liquid and a lot more volatile.

Take Ghana, once a darling of frontier investors, as an example. It is back in favour, as its newish government gets to grips with public finances. Yvette Babb, of J.P. Morgan, calculates that 37% of the stock of Ghana’s public debt is already held by foreigners. The effective interest rate it pays on domestic debt is around 16%. The weight of long-term investors is “substantial”, she says, so the risks of a knee-jerk sell-off are low. But how long before such high yields lure in the tourists?