Companies in the region vote with their feet against political uncertainty 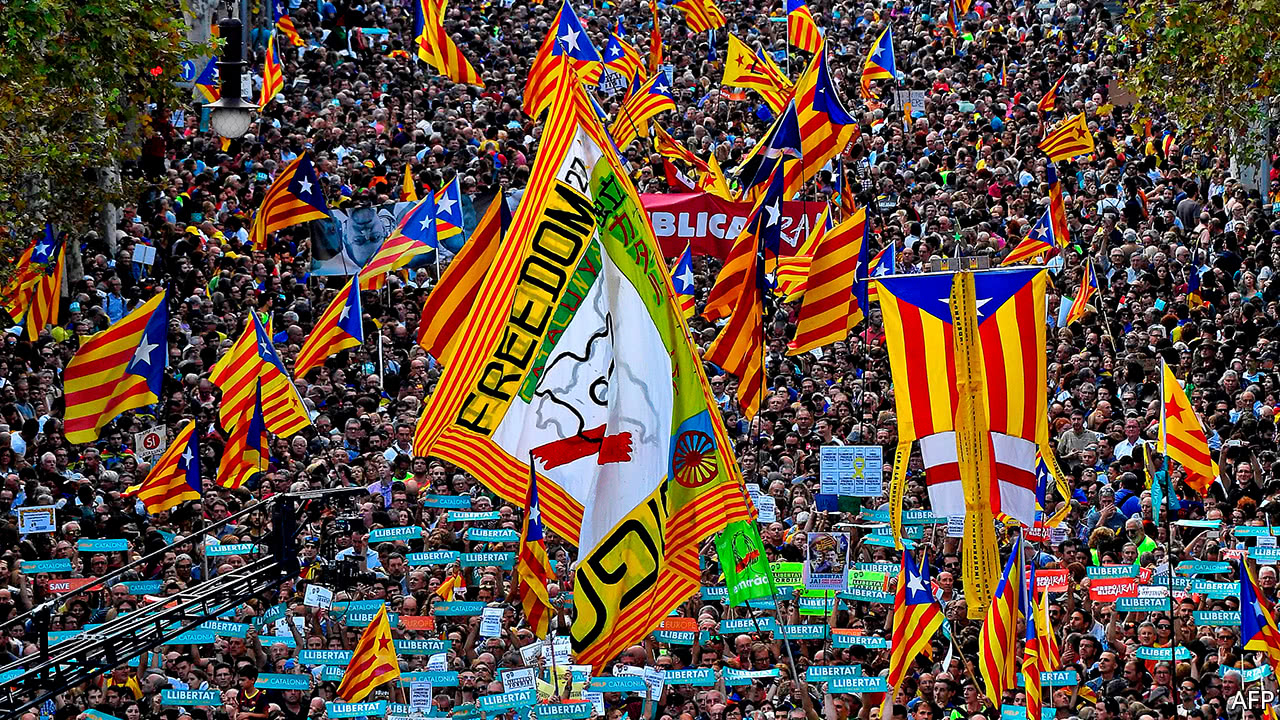 “WE ARE used to dealing with political crises, but not a break in the rule of law,” says the boss of a big Barcelona cement firm, of Catalonia’s constitutional crisis. Fearing separatists in the region would declare independence, as they did on October 27th, he shifted its headquarters to Madrid. That ended decades of family tradition, but there is no plan to return. “It was a painful decision, but we had no alternative,” he says.

Catalonia accounts for roughly a fifth of Spain’s GDP and a quarter of its exports, but only a sixth of the country’s population. Its diversified economy is the envy of much of Spain, notes Jordi Alberich Llaveria of Cercle d’Economia, a business lobby in Barcelona, thanks to flourishing medium-sized, family-run industrial, textile and perfume-making firms. It has become a hub for multinationals, carmakers, pharmaceutical firms, fashion boutiques and hundreds of startups.

The cement-maker’s boss worries that those industrial and entrepreneurial traditions may fade because of political turmoil. In an independent Catalonia, his company’s double-taxation deals with other countries (70% of its revenues come from abroad) might have been invalid.

Many others have made the same choice. By this week, over 2,900 firms had moved legal headquarters elsewhere in Spain as a result of the crisis—around half to Madrid. The central government made shifting easier to do with a decree on October 6th that removed a previous requirement for a shareholders’ meeting to grant permission first. Before the crisis, the region hosted seven of the 35 companies on Madrid’s IBEX stock index. Only one, Grifols, a pharmaceutical firm, remains.

The exodus slowed after Madrid imposed direct rule in late October and the jailing of separatists in early November. But uncertainty persists over the result of an election on December 21st. Business would like a lower vote for separatists, but that would not dispel their worries.

Moving legal headquarters need not mean that business operations and factories leave Catalonia. But in practice moving headquarters can affect where staff, especially senior ones, spend time. This is especially the case for some 1,000 firms that have taken a slightly bigger step—shifting their fiscal as well as their legal registration. “You move the board, then the CEO, then senior management. There is a natural knock-on effect,” says one company boss. “The danger is if the brains start leaving,” warns a member of a business lobby.

The financial industry has seen the biggest shift. Before the crisis, Catalonia was home to several of Spain’s largest insurance firms. Five have moved to Madrid; the sixth, a subsidiary of AXA, a French giant, said it is going to Bilbao. The two biggest Catalan banks, CaixaBank and Banco Sabadell, reportedly saw billions of euros of deposits withdrawn weekly at the peak of the crisis. That stopped, and their battered share prices stabilised, only when they left Catalonia. Neither of the big banks will return. “We don’t see any reason to reverse that decision, even in the medium term,” says an executive at one of them.

Firms in other industries are delaying expansion. “Our corporate clients in Catalonia have stopped investment,” says the banker. An official at Barcelona’s city hall (his office overlooks a huge poster demanding “freedom for political prisoners”) confirms that investment has slowed. Big Spanish companies in various industries say local uncertainty is worse than what they face in Britain because of Brexit, where there is at least a legal process.

Other economic activity has slowed, too. Barcelona lawyers, usually busy with property developments, say they have had little business since September. Guifré Homedes Amat, a property agent who also manages 5,000 flats and houses in Barcelona, says trade is flat, after two booming years. Once-keen foreign buyers of second homes—notably rich Egyptians, Chinese and Turks—watch and wait.

José Luis Bonet, boss of Freixenet, a big producer of Cava wine, suggests that damage has also been done to the brand of Barcelona. He frets that fellow Spaniards may boycott his own firm’s sparkling product this Christmas, as they have in the past when there were separatist tensions. A lawyer who advises a Catalan sweets factory and a maker of baby products says both firms worry that compatriots will shun their wares. Depending on the election, business confidence could slowly return—but many firms will probably keep their headquarters elsewhere for the foreseeable future, just in case.

Source: economist
Companies in the region vote with their feet against political uncertainty