Three red flags for Netflix ahead of its earnings report

Netflix is scheduled to report earnings after the bell on Monday, but as much as the stock has surged this year, technician Craig Johnson of Piper Jaffray is warning investors against the streaming giant ahead of the event.

“There’s a 9 percent implied volatility move coming into the quarter here,” he said Friday on the “Trading Nation” segment of CNBC’s “Power Lunch.” “From my perspective, I’m not committing fresh money with a stock this far extended above its 50- and 200-day moving average and even the longer-term uptrend support line.” 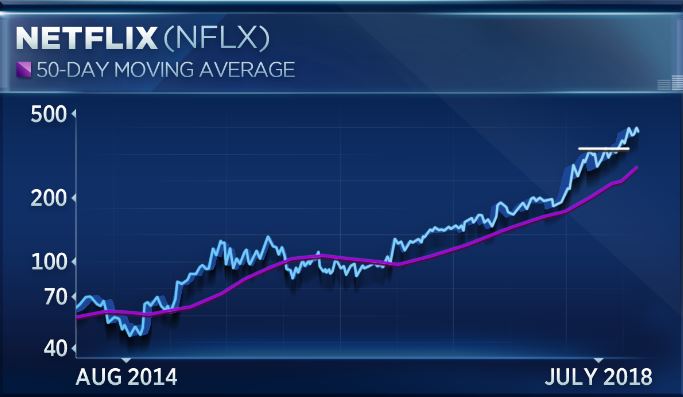 In other words, Johnson believes that Netflix is overbought and wants to wait for a pullback before buying the stock, which has soared about 107 percent this year.

As of Monday morning, the stock had fallen 5 percent in just the past week leading into earnings. Michael Binger, a senior portfolio manager at Gradient Investments, is also warning investors against buying the stock at these levels for two reasons. Firstly because of its “astronomical valuations” – the company sports a P/E of 266 times earnings – and secondly because he believes the company’s original content is starting to become a weak spot.

This could prove particularly worrisome for Netflix, as the streaming giant’s original content has been seen as one of its biggest strengths. On that note, Binger also mentions that there are reports that viewing hours on Netflix are starting to dwindle, leading him to believe that competitors Hulu and Amazon Prime may be taking viewers away from the streaming platform.

Netflix was trading at around $397 midday Monday ahead of earnings.

Disclosure: Neither Michael Binger nor Gradient Investments have any positions in NFLX and AMZN.

Disclosure: Comcast, which owns CNBC parent NBCUniversal, is a co-owner of Hulu.

Source: Tech CNBC
Three red flags for Netflix ahead of its earnings report